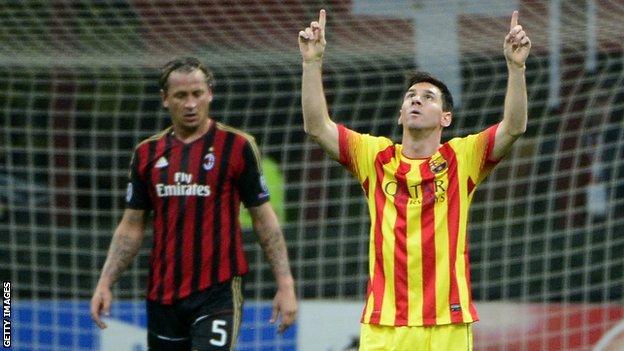 Lionel Messi marked his first start since coming back from a thigh injury with an equaliser as Barcelona drew 1-1 with AC Milan in the Champions League.

The Argentine scored his 12th goal of the season to cancel out Robinho's opener and keep Barca top of Group H.

There were wins for Napoli and Zenit St Petersburg, while Steaua Bucharest snatched a 1-1 draw at home to Basel.

Messi, who was absent for three weeks with a thigh injury, made his comeback as a substitute for Barcelona as they were held 0-0 in La Liga at lowly Osasuna on Saturday.

Manager Martino brought him back into the starting line-up in a bid to maintain his side's 100% record in Group H, but they were soon behind.

Milan's Sulley Muntari had seen an early goal correctly ruled out for offside when Robinho pounced on Javier Mascherano's poor attempted clearance and played a one-two with Kaka before slotting past keeper Victor Valdes.

Messi, though, levelled before half-time, staying on his feet in the penalty area amid a number of tackles to finish coolly after Andres Iniesta had won the ball to play him in.

The second half was a stalemate as Robinho failed to connect with a Muntari cross soon after the break, while an Iniesta effort from close range was stopped by Milan's second-choice keeper Marco Amelia.

Barcelona stay two points clear of Milan at the top of Group H, with the sides set to meet again at the Nou Camp on 6 November.

Milan are two points ahead of third-placed Celtic, who beat Ajax 2-1.

Diego Costa scored twice for Atletico Madrid as they maintained their 100% record in Group G with a comfortable away win over Austria Vienna.

Raul Garcia gave Diego Simeone's side an early lead, before Costa - a target for Liverpool during the summer - struck either side of half-time. The defeat leaves Vienna bottom of the group with one point from three matches.

In the group's other game, Porto were forced to play a man short for 84 minutes at home to Zenit St Petersburg after Hector Herrera's early sending off.

Herrera was booked for conceding a free-kick, then shown a second yellow card for encroachment as it was about to be taken.

Porto almost held out - but fell to a 1-0 defeat when their former striker Hulk set up Aleksandr Kerzhakov for an 86th-minute winner.

There was late drama too in Romania, where substitute Leandro Tatu gave Steaua Bucharest their first goal and point in Group E.

Tatu struck in the 88th minute to give Steaua a 1-1 draw at home to Basel, who had taken the lead early in the second half through Marcelo Diaz's curled effort. Chelsea top the group after a 3-0 away win over Schalke.

As Borussia Dortmund won 2-1 at Arsenal, Napoli moved level on points with both sides at the top of Group F by beating Marseille 2-1 at the Stade Velodrome.

Jose Callejon drilled a shot in at the near post to give Rafa Benitez's side a half-time lead, and Duvan Zapata doubled their lead with a ruthless finish from 20 yards after being set up by Dries Mertens.

Andre Ayew's 25-yard strike pulled one back for Marseille late on, but defeat leaves them bottom of the group with no points - and increases the pressure on manager Elie Baup.