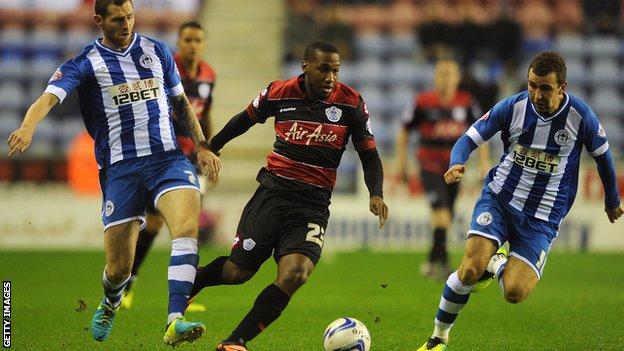 QPR missed the opportunity to move into the Championship top two as they shared the points at Wigan.

Charlie Austin had an excellent chance to give Harry Redknapp's side the lead but could only hit the side netting with his close-range effort.

Chris McCann had the best chance of the game for Wigan, but saw his point-blank header come back off the post, Callum McManaman sending the follow-up over.

The result means QPR are three points behind league leaders Burnley in third.

Wigan extended their unbeaten home run to six games in the Championship and move into 13th.

A POINT TO PROVE

Both last season's clashes in the Premier League were also drawn; 2-2 at the DW Stadium last December, and 1-1 at Loftus Road in April

The Latics gave a home debut to young goalkeeper Lee Nicholls, while new loan signing Marc Albrighton, who signed a 28-day deal from Aston Villa earlier on Wednesday, had to settle for a place on the bench.

Wigan boss Owen Coyle had said he expected his team to be "ruthless" in front of goal but the early attacking intent came from QPR, Niko Kranjcar seeing a volley fly high over the bar, before Junior Hoillett saw an effort go wide.

At the other end, Manchester United loanee Nick Powell was tormenting Danny Simpson and twisted away from the QPR defender to test visiting keeper Rob Green.

And when QPR's Alejandro Faurlin was dispossessed deep in his own half, McManaman, who signed a new long-term contract at the DW Stadium hours before kick-off, jinked his way past Richard Dunne and Clint Hill, only to hit his shot narrowly wide of the post.

Having withstood a period of Latics pressure, the visitors rallied, Benoit Assou-Ekotto beating Jordi Gomez to find an unmarked Gary O'Neil who could only scuff his effort wide, before minutes later launching a 30-yard drive that Nicholls could only beat away.

"Looking at Wigan they have a stronger squad than us and certainly more strength in depth."

With five minutes left of the half, QPR should have taken the lead with Faurlin finding Austin, only for the former Burnley man to hit the side netting, before Gomez sent a 25-yard effort just beyond the post.

After the interval, Wigan substitute Marc-Antoine Fortune brought a good save from Green, and McCann should have opened the scoring for Wigan but sent his header against the post, before the generally impressive McManaman struck the rebound high over Green's bar.

Redknapp brought on veteran striker Andy Johnson late on, and the Rangers frontman tested Nicholls with his first touch of the ball.

Both sides pushed for a late winner in a scrappy conclusion, but had to settle for a point apiece.

"I think we had the better chances and I think we had a couple of great chances in the second half to win it. We were much better after the break. We certainly could have got the three points that I'm sure we were worthy of.

"We've got to keep banging on the door and soon those goals will go flying in. We're still unbeaten at home but we certainly feel we should have got the three points tonight. We just need to follow the courage of our convictions more."

"I thought we dominated the first half. It was a good away performance. I think for 70-odd minutes we did well but didn't have the final ball. Looking at Wigan they have a stronger squad than us and certainly more strength in depth.

"At the end it was a free for all, there was free-kicks, fouls and goodness knows what going on all over the place but we couldn't score. We did have good control but the final ball was lacking."