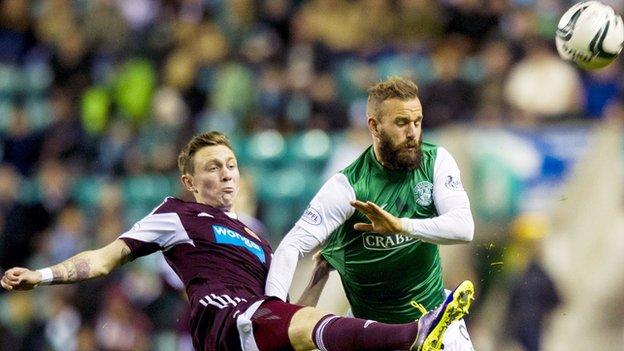 But Hearts took the lead against the run of play when Ryan Stevenson swept a shot past Ben Williams.

Liam Craig missed an excellent chance to draw Hibs level and the hosts' misery was complete when captain James McPake was sent off late on.

Hearts - 15 points adrift at the bottom of the Scottish Premiership - join Aberdeen, Inverness and St Johnstone in Thursday's semi-final draw with Gary Locke's side bidding to reach their second successive League Cup final.

But the Tynecastle outfit's chances of reaching the last four had seemed remote in the early stages at Easter Road.

Hanlon attacked Robertson's cross with a powerful header that came back off the right-hand post in Hibs' first attack.

The home side were firmly in control and Robertson exchanged passes with Collins before drawing a fine save from Jamie MacDonald.

And the goalkeeper frustrated Pat Fenlon's men again moments later when Robertson's controlled half-volley was touched on to the bar.

Collins did his best to beat the Hearts stopper with a low drive from the right but MacDonald was equal to it.

The visiting fans were given some encouragement when Stevenson, a pre-match doubt after going off injured in Saturday's league defeat by Kilmarnock, fashioned a shot wide.

And the 29-year-old stunned the home crowd when he broke the deadlock with an excellent strike on the turn from 20 yards.

McPake became the latest player to be denied by MacDonald shortly before half-time, the Hibs skipper's header smothered by the keeper.

Hibs struggled to rediscover the verve and potency of their early advances and Fenlon sent on Ross Caldwell and then Abdellah Zoubir in place of Collins and Tom Taiwo, respectively.

In between the two substitutions, Craig was played in by Rowan Vine and had only the keeper to beat but his shot lacked conviction, allowing MacDonald to make another block.

Referee Willie Collum had produced his yellow card several times to deal with some heavy challenges and McPake's reckless lunge on Callum Paterson resulted in a straight red.

And some dogged defending from Hearts in the closing stages ensured they kept their lead intact and secured a semi-final berth.