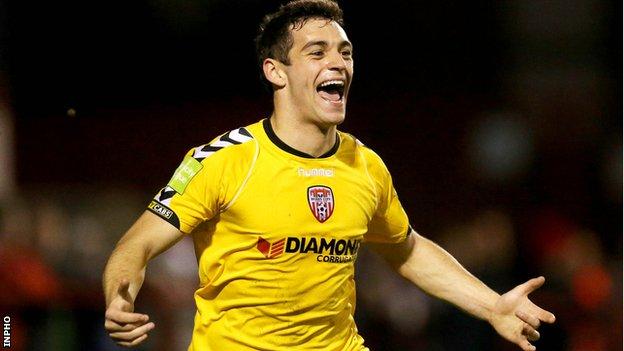 Derry City kept alive their hopes of qualifying for Europe by securing a fourth-placed Premier Division finish thanks to this hammering of Limerick.

Further goals from Simon Madden and Dean Jarvis, his first for the club, completed the Brandywell rout.

Should Sligo Rovers win next week's FAI Cup decider against Dundalk, Derry will qualify for the Europa League.

Madden's deep cross appeared to be harmlessly floating out of play, but Limerick centre-half Stephen Folan inexplicably headed back across goal, where Rafter planted a header past the helpless Shane Cusack.

The hosts doubled their lead in the 47th minute when good work from Patrick McEleney on the left teed up McDaid for the simplest of finishes from two yards out.

Derry secured their fourth-placed finish and potential European qualification on the hour mark when Patterson picked up Folan's loose ball and crossed for McDaid to take a touch and fire home his second of the evening.

City were not finished as first Madden's cross was headed home by Jarvis after 66 minutes and three minutes later Patterson found McDaid who rolled the ball home for his treble.

McEleney's exquisite through-ball freed Madden who lofted a delightful finish past the onrushing Cusack 12 minutes from time as City ended their season on a high.