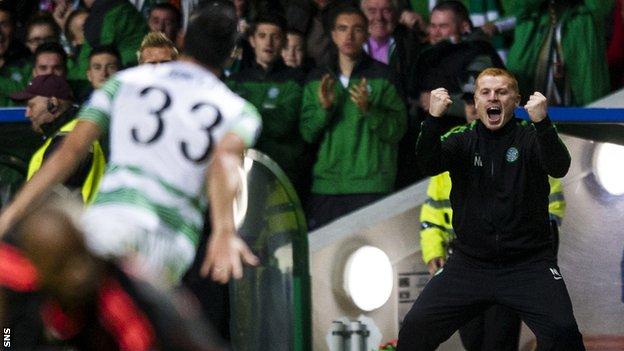 The 2-1 victory over Ajax was achieved not as the result of a vintage performance by Celtic but one that reeked of Champions League know-how.

Where last season Neil Lennon's inexperienced side failed to defeat a very beatable Benfica team in their first outing, this time round they churned out a win that gives them genuine hope of repeating last year's feat of reaching the last 16.

Lennon may have lost the services of enormously important players like Victor Wanyama and Gary Hooper since the last campaign, but there are increasing signs that, on this stage, Celtic now have a maturity that might yet compensate for the loss of such talent.

Although the first two matches ended in defeats by AC Milan and Barcelona, Celtic put in good performances, particularly in the San Siro.

Tuesday's display may, paradoxically, have been their least impressive in some regards.

Crucially, though, they were still able to see off an Ajax team that created some good opportunities of their own but whose lack of a killer instinct cost them dearly.

Their supposed danger-men, Viktor Fischer and Kolbeinn Sigthorsson, were too easily snuffed out by a largely comfortable-looking Celtic defence, with Virgil van Dijk again proving to be a vast improvement on the departed Kelvin Wilson.

With Wanyama long gone and Scott Brown having to sit this one out as a result of a moment of foolishness against Barcelona, Celtic needed Beram Kayal to recapture the form of his first season at the club.

In the early stages, as Ajax grew increasingly confident and dangerous, it looked unlikely as the game largely passed him by.

But a phenomenal tackle on Fischer, to deny the winger a clear run on goal and quite possibly prevent the Dutch from opening the scoring, seemed to galvanise the midfielder because, from that moment onwards, he was a different player, leading his manager to describe his performance as "worth his weight in gold".

Georgios Samaras, such a big player for Celtic in Europe over the last 18 months, flitted between brilliance and ineptitude, while on the other flank, James Forrest showed flashes of what Celtic fans have been desperately hoping he can eventually produce on a consistent basis - an electric turn of pace and threatening deliveries, not to mention a cool head to slot home an unstoppable penalty.

Up front, Teemu Pukki persevered but doesn't immediately look like he can fill Hooper's goalscoring boots, which demonstrates that signing players of potential rather than proven talent can be something of a gamble.

While the victory was achieved without three first-choice players in the shape of Brown, Kris Commons and Adam Matthews, Lennon will clearly hope to have his captain back from suspension for the return leg in two weeks' time (in the unlikely event Celtic can persuade Uefa to reduce his ban back from three games to just the one) and perhaps more realistically have Commons fit again.

Joe Ledley, who came off the bench as he continues his return to full fitness, should also be available to start as Lennon looks to take something from the match to ensure they stay in contention for a place in the last 16.

On the evidence of Tuesday, there is no reason to believe that is beyond Celtic.

They can improve and, although Ajax will be a different proposition in the Amsterdam Arena, Celtic's assured performance in Milan suggests they are no longer cannon fodder on their European travels.