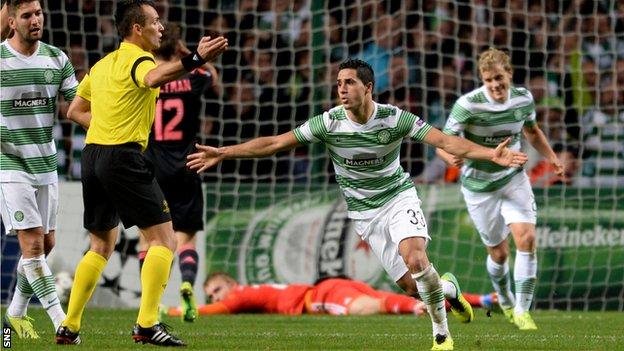 Former Celtic winger Regi Blinker says the Glasgow side can complete the double over Ajax when they play their Champions League return in Amsterdam.

Celtic gathered their first points in Group H with a 2-1 win in Glasgow and play in the Netherlands on 6 November.

"I can see them beating Ajax and then the two other games, they are unpredictable," said Blinker.

After travelling to Amsterdam, Celtic will host AC Milan, who sit second, two points ahead of the Scottish champions, after their 1-1 draw with Barcelona in Italy before travelling to Spain for their final group game.

Ajax coach Frank de Boer thought his side, who sit bottom with only one point from three games, would struggle to reach the last 16 but felt they could still qualify for the Europa League by finishing third.

However, he thought his young team were unlucky at Celtic Park having dominated possession and missed several good chances.

Blinker accepted that most in his homeland appeared to agree with that assessment but told BBC Scotland: "The pundits were saying after it that Ajax were playing better football, but my opinion is that better football won't get you results every time.

"I saw a reasonably good Ajax team who were passing the ball around and playing like a Dutch team should play and then I saw a real, effective Celtic team that scored in two crucial moments.

"I saw the the way Celtic played and I liked that better - there was a longer ball played up front, and then they could run there with James Forrest and Georgios Samaras - because it was more effective."

Blinker, who played for Sheffield Wednesday and Celtic after 10 years with Feyenoord, picked out compatriot Virgil van Dijk for special praise.

"Celtic are much more aggressive physically and especially van Dijk impressed me in the game," the 44-year-old said of the central defender who joined Celtic from Groningen this summer.