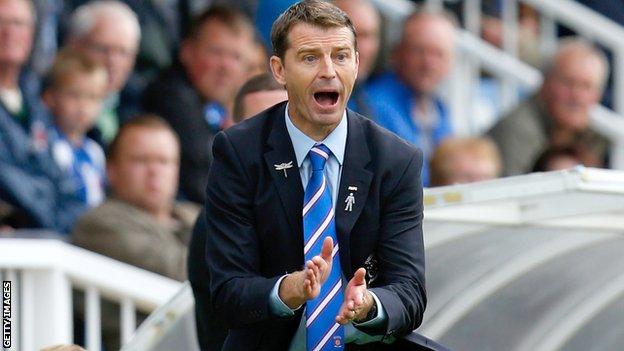 Hartlepool boss Colin Cooper says he is not comfortable discussing speculation linking him with the vacant manager's job at former club Middlesbrough.

The ex-Boro captain and coach, 46, was given the first managerial post of his career at Victoria Park in May.

after three years in charge.

Cooper scored 13 goals in 422 games for Boro and spent six years at the club as a coach.

"It's difficult to talk about without being disrespectful to Hartlepool as I'm very grateful for the opportunity I have been given," Cooper told BBC Tees.

Born in Durham, Cooper began his playing career on Teesside as a 17-year-old.

He left after seven seasons at Boro but later returned for another eight before becoming the club's reserve-team coach.

Aside from a brief spell as Peter Jackson's assistant at Bradford City in 2011, Cooper had spent the entirety of his coaching career at the Riverside Stadium before replacing John Hughes as Pools boss.

And after a poor start to this season, Pools' 3-1 victory against AFC Wimbledon on Tuesday was their fifth successive win and lifted them to 14th in League Two.

"I have said from day one that I've been working really hard for a chance in football management for quite a while," he continued.

"We're going ever so well at the moment and have worked very hard to get things working the way we want.

"To be asked about the Boro job is a very hard question for me to answer. I'm ambitious, don't get me wrong, and I want to do as well as I possibly can at Hartlepool and in whatever management career I have."