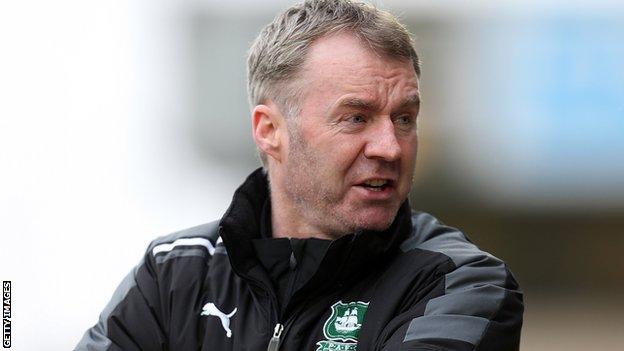 Plymouth Argyle manager John Sheridan says he is in talks to add another striker to his goal-shy attack.

With just eight goals, Argyle have the worst goalscoring record in League Two after drawing another blank in Tuesday's 0-0 draw with Newport County.

"I'm talking to a club and want to get it done as soon as possible," he said.

The Pilgrims have gone eight games without a win in all competitions and earlier this week Sheridan admitted his position is under threat.

"If I could get a couple of new strikers in and I could afford it then I probably would do," he added. "The chairman has told me that there is money there to bring people in and we need a lift from somewhere."

Sheridan brought in experienced striker Paul Hayes from Brentford on a one-month loan, but the 30-year-old has yet to score in five appearances for the club.

Marvin Morgan, signed from Shrewsbury Town in the summer, is expected to be out for several months with a shoulder injury, while Reuben Reid is struggling for goals after a promising start to the season.

"It's about those instincts in the box," continued Sheridan. "There were little half-chances against Newport and that's what strikers get paid for and why they're on the most money.

"It can't go on much longer. The chances we've created, we should be scoring goals. If you're not scoring you'll keep drawing or you'll get beaten.

"We're not playing that badly and Newport were no better us but it's another disappointing performance and no goals - it's a big, big problem."

"Hopefully I can bring someone in who can help us get the win we're after."

Sheridan said the rest of his team's game was in reasonable shape, although he bemoaned his team's inability to retain possession

"A draw was a fair result - they're well organised and compact and played a similar system to us," he said.

"We started really well but we just didn't keep possession in the final third for long enough periods - that was our biggest downfall.

"When it did go forward it was coming back at us and we've got to work a lot harder to create chances and cause the opposition more problems.

"It's little stupid things like people running past the ball when we haven't even got possession - we didn't keep the ball for long enough periods."