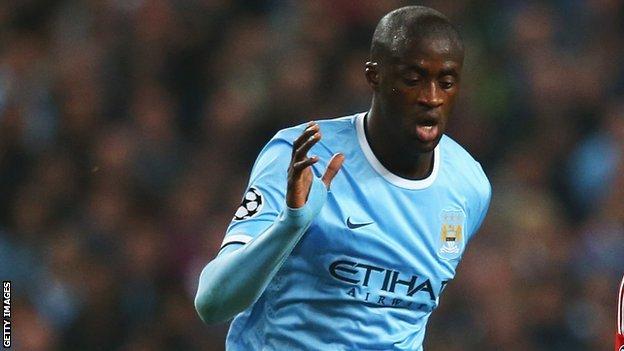 The Khimki Arena pitch is in poor condition after heavy rain and City boss Manuel Pellegrini believes the game should not be going ahead.

But Ivory Coast star Toure said: "You have to play on pitches with problems. I don't have any problem with that.

"In Africa we have worse pitches. Most of all we have to do our best to try to win this game."

City can put themselves in a strong position to claim a last-16 place for the first time with victory over CSKA Moscow in their latest Group D game.

But the build-up to the clash in Russia has been dominated by concerns over the playing surface, with the venue only passed fit by Uefa a fortnight ago.

Persistent heavy rain and a high volume of games in the early part of the season ruined the turf and CSKA have been forced to play their home games elsewhere for almost two months.

Pellegrini said: "We must pray - if it is raining I think it will be impossible to play.

"I am surprised (it has been passed fit) because they didn't allow the other game, against (Viktoria) Plzen, here."