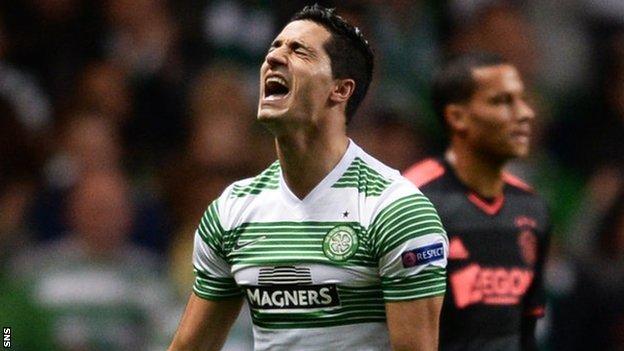 Beram Kayal is hoping Scott Brown and Kris Commons can play in the return game against Ajax despite scoring against the Dutch in their absence.

Kayal's goal in the Champions League win was his first since May 2011.

"I am so happy to score, but the important thing is the three points," said Kayal, given his start through Commons' injury and Brown's suspension.

"I hope a few come back into the squad. We missed Scott and Kris. Brown is a great captain and Commons is magic."

That's only my second penalty for the first team. Ajax were trying a wee bit of mind games, but that just made me concentrate more

Celtic leapfrogged Ajax into third place in Group H, two points behind AC Milan, and next travel to Amsterdam Arena on 6 November.

Commons could still be an injury doubt by then, while Brown will be suspended again unless Celtic win an appeal against his three-match ban.

"I'm just back after four weeks out with a groin injury, but hopefully I can stay fit now and try to help the team as much as I can," added Kayal.

Kayal thinks Celtic still have a chance of overtaking AC Milan to make the last 16 for a second year running.

"In the last two games against Barcelona and AC Milan, we didn't get the points, but we are working hard as a team and it's a great win for us," said the Israel international.

"We needed these three points, our first after three games, but the dream is still there.

"We are just looking step-by-step, but it now gives us a good chance."

James Forrest's penalty in first-half stoppage time put Celtic ahead against Frank de Boer's Amsterdam outfit before Kayal slotted home a second eight minutes into the second half with the help of a deflection.

Forrest was made to wait as Ajax contested the penalty decision after Anthony Stokes was felled by Stefano Denswil, but the winger said he refused to be disturbed.

"They were trying a wee bit of mind games, but that just made me concentrate more," the Scotland international told BBC Scotland.

"I was a wee bit nervous, but it was good nerves and I was confident I was going to score.

"That's only my second penalty for the first team, but I'm always happy to take them."

The versatile Charlie Mulgrew said Celtic should now fear nobody in the competition but stressed: "It's just three points at home - we are not getting carried away."

"I made a few saves, but that's what I'm there to do and it's nice to make them," said the Englishman.

"We have been unlucky in the first two games. We maybe had a little more luck, but we were clinical in front of goal, took our chances and we got the three points we deserved.

"It'll be a different game away from home - but, if we play the way we did against Ajax and in Milan, we can go and pick up a result."