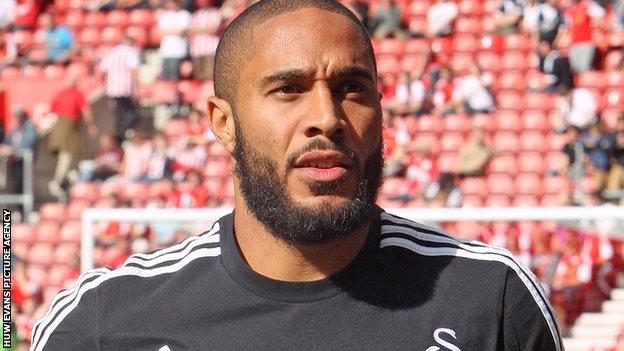 Swansea City will once again be without defender Ashley Williams for Thursday's Europa League game against Kuban Krasnodar.

Williams has missed Swansea's last five games and has been unable to train because of an ankle injury.

"He's still in some pain when he does certain movements," manager Michael Laudrup said.

"I already said a couple of weeks ago [that] we are not going to rush it."

In Williams's absence Jordi Amat set to continue alongside fellow Spaniard Chico Flores at the heart of the Swans' defence.

Laudrup has been impressed with 21-year-old Amat's performances whilst deputising for Williams.

"Jordi has confirmed what I already knew and what I expected from him," Laudrup added.

"I'm pleased with what I've seen."

Left-back Ben Davies will miss the Group A game against the Russian side after being ruled out for up to four weeks with an ankle injury.

Winger Pablo Hernandez could return after recovering from a hamstring injury while Jonjo Shelvey and Jose Canas could be recalled in central midfield.