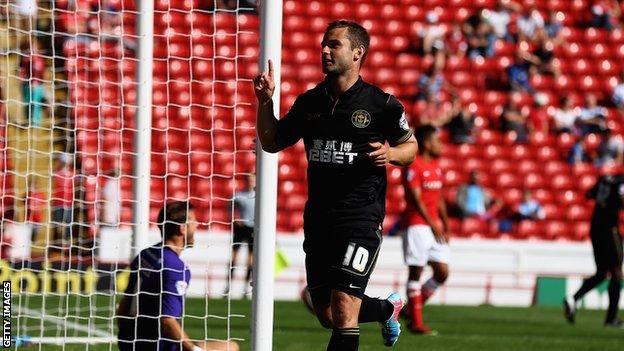 Wigan midfielder Shaun Maloney is to undergo hip surgery that will keep him out for a minimum of three months.

He will miss Scotland's friendlies against the United States and Norway in November, as well as a large portion of Wigan's Championship campaign.

The 30-year-old, who has not played since 14 September, has been struggling with the problem since pre-season.

I think it's certainly fair to say it will be a minimum of three months, and obviously there is a chance it could be longer than that

"He had it when we came into the club over the summer - an existing hip injury," said Latics boss Owen Coyle.

"To be fair to Shaun, he tried to play through that, which we thought might be manageable for the season.

"But when he was away with Scotland he picked up a back injury that had actually led from the existing hip injury, so will now go in for that hip operation."

When asked when Maloney would be fit to return, Coyle added: "If I knew it was going to be three, four or five months, then I could tell you. We won't know that until the surgeon opens him up and sees the extent of the damage.

"As it is, I think it's certainly fair to say it will be a minimum of three months, and obviously there is a chance it could be longer than that."

Maloney, who was part of the Wigan squad that won the FA Cup and were relegated from the Premier League last season, has scored three times in six club appearances this term.

Wigan host Russian side Rubin Kazan in the Europa League on Thursday and will be looking to protect their unbeaten record in Group D, having taken four points from their first two matches.