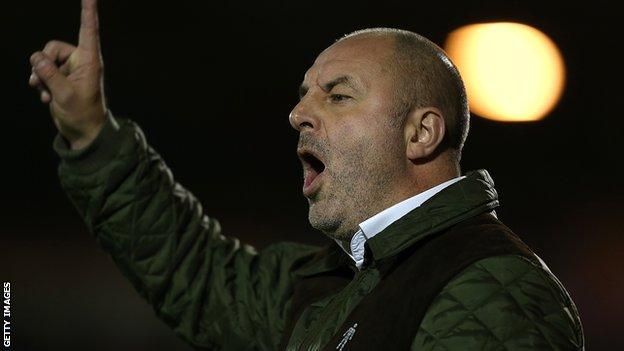 Manager Keith Hill has asked Rochdale supporters to be patient with his team, despite them going top of League Two.

their seventh victory in eight league outings, to climb to the summit.

But Hill was unhappy with the comments of some fans while his side were trailing to the Cobblers.

They're not rubbish. They're exceptional people who are standing up to the challenges and the demands that I put in front of them

"I'm just calling for a bit of respect, a bit of patience and a bit of understanding of the development stage that we're still in," said Hill.

He told BBC Radio Manchester: "I'm not upset but I'm just calling for support. I can't have a confident, compact, 'everybody in it together' football club if some supporters are shouting at me to get some of the players off who are 'rubbish'.

"They're not rubbish. They're exceptional people who are standing up to the challenges and the demands that I put in front of them. I never call my players rubbish and I wouldn't dare show them that lack of respect."

After George Donnelly's late winner against Northampton, Dale are two points clear of second-placed Chesterfield and Exeter in third.

They have won all but one of their matches since the start of September, with a 3-0 reverse at Portsmouth on 5 October their only blip.