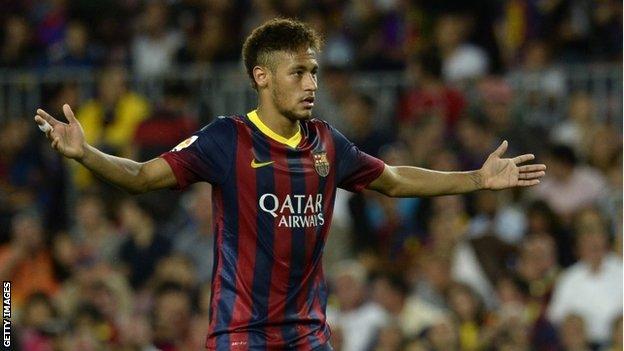 Barcelona forward Neymar is excited about his first meeting with Real Madrid on Saturday.

The Brazil international joined Barca from Santos in the summer for £48.6m and has scored three goals in 13 games.

"The Clasico is the most important game for any player," the 21-year-old told the club website.

Did you know? Neymar is Santos's leading scorer in the post-Pele era despite leaving them at the age of 21.

He added: "This will be my first Clasico and I hope to have a great debut, preferably with a victory."

Coach Gerardo Martino, who replaced Tito Vilanova in the summer, is not worried about coming into the game on the back of two draws.

"I have no doubts on the team's ability to perform. I would have liked to defeat Osasuna and Milan, but we're doing well and we're still growing," the Argentine said.

Meanwhile, Barcelona fans will form a mosaic for Vilanova, who quit in July to continue treatment for cancer.

A club statement read: "Once FC Barcelona and Real Madrid jump out onto the pitch on Saturday afternoon, the fans in the Camp Nou send a message of encouragement to the former FC Barcelona manager Tito Vilanova with a mosaic that will read 'Forca Tito'.

"The mosaic, which will be made up of 98,000 individual pieces, will combine the Blaugrana [Barcelona] colours with the colours of the senyera [Catalan flag]."