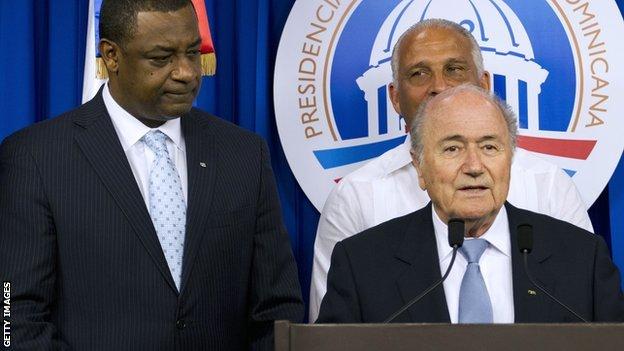 Football already has 'The Special One' with Chelsea manager Jose Mourinho.

Manchester United fans have taken to calling David Moyes 'The Chosen One' after Sir Alex Ferguson decided he was the man to replace him at Old Trafford.

Now Fifa president Sepp Blatter has, it appears, made Jeffrey Webb 'The Anointed One' by making it clear he views his vice-president as a potential successor at the head of football's world governing body.

It's about giving back, it's about serving the game. Who knows what lies in the future?

That would cap a remarkable rise for Webb, a 49-year-old lawyer from Grand Cayman, the bejewelled isle in the Caribbean Sea that this week played host to the great and the good of the game as they made plans for its future.

A gala dinner attended by regional political figures was designed to show that Concacaf, the confederation responsible for North America, Central America and the Caribbean, has been reborn after several years stained by corruption.

Webb, who took charge of Concacaf in 2012, launched an integrity report and audit into the activities of his predecessor Jack Warner. It concluded there had been serious managerial failings and that millions of dollars of funding had been misused.

He then received a significant profile boost when he was appointed the head of Fifa's anti-discrimination task-force in March, granting him an opportunity to hone presidential skills by formulating an agreement over a response to racism - before presenting amendments to the world governing body's statutes at its annual congress in Mauritius.

With his credentials established, Webb's presidential candidacy looks as if it is being pushed into the next phase.

Blatter, addressing the audience of dignitaries in the Caribbean at the start of the week, remarked that Fifa could soon have a new president and that it could be Webb.

The remark was later spun as a throwaway line, no more than a crowd-pleasing joke.

But many a true word is said in jest - and it appears that Webb is now seen within Fifa circles as a credible contender to replace Blatter when the moment is right.

When asked about Webb's viability as a successor, Blatter was keen to dampen his initial enthusiasm, emphasising time was on Webb's side.

"He is just one and a half years in [to his time at] Fifa, so let him grow up," said Blatter, suggesting Webb needed more experience and time to get used to wielding the power he has because it "is not so easy to be at the helm of an organisation like Fifa".

Webb is certainly a man of ambition, responding that he would "definitely" like to become Fifa president one day, while making it clear that he would not be going up against Blatter when elections are next held in 2015.

"I'm a servant of the game," said Webb. "When I set out to volunteer and be involved in this game, it was about passion, it was about my football club and helping them.

"Then it became about getting involved in my national association. I think I've had 28 or 29 different jobs since I've been involved in football.

"It's about giving back, it's about serving the game. Who knows what lies in the future?

I had no idea two or three years ago that I'd become vice-president of Fifa or president of Concacaf, but that's life, that's the journey

"I had no idea two or three years ago that I'd become vice-president of Fifa or president of Concacaf, but that's life, that's the journey."

After 38 years with Fifa, 15 as president, Blatter has seen off multiple contenders and challengers.

But it appears his thoughts are turning to his eventual replacement - and someone who will follow the path he has been treading.

In the meantime, the coded messages that seem to denigrate Uefa president Michel Platini's as-yet undeclared candidature continue. Blatter has warned that it would not be good for Fifa's next president to be someone who wants to "change everything".

That is a reference, perhaps, to Platini's plans for a 2020 European Championship that spans the entire continent, something the Fifa president has criticised openly.

"I could say that this is not my business, but it's a little bit my business," remarked Blatter when asked about succession planning.

"And then I will have a legacy - or a president who at least will go in the same direction that I have been."

In Webb, it seems Blatter has found the man he's been looking for.