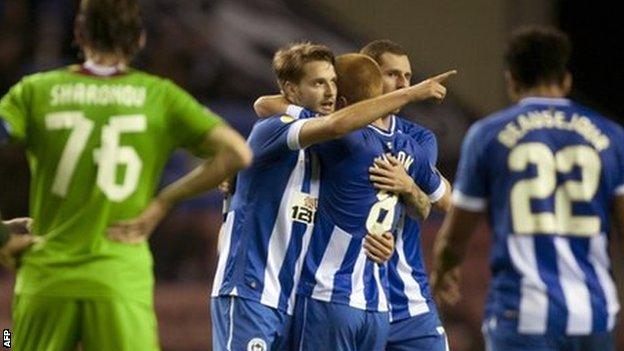 Wigan Athletic remain in the hunt for a place in the Europa League knockout stages after a gutsy draw against Rubin Kazan at the DW Stadium.

But their Championship hosts produced a spirited reply and levelled through on-loan forward Nick Powell.

The 19-year-old netted from 20 yards before team-mate Marc-Antoine Fortune was denied twice late in the game.

Substitute Fortune first shot tamely at Sergei Ryzhikov before the goalkeeper produced an excellent save from the former Celtic and West Brom forward in stoppage time.

Despite failing to find a winner, Wigan will take encouragement after coming through their toughest Europa League test unscathed against seasoned European campaigners.

They reach the midway point in Group D with five points from three games, second in the table, two points behind leaders Rubin.

The Russian visitors, quarter-finalists last season, showed their experience by sweeping into a 15th-minute lead.

Jordi Gomez wasted a great chance to equalise after an excellent free-flowing move before Powell, on loan from Manchester United, scored his third European goal for Wigan, a well-placed low finish that beat Ryzhikov for pace.

Opportunities were limited for both teams after the interval, but it remains to be seen how costly Fortune's failure to net a late winner will prove to Wigan, who visit Rubin on 7 November.

But with a home match to follow against Zulte-Waregem, with whom they drew in Belgium, Latics manager Owen Coyle will be confident his side can progress to the round of 32.

"We knew they were a quality side and they showed that. All credit to the lads, they strictly stuck to their task and scored a great goal through Nick Powell.

"We thought we were worthy of three points but we were delighted with the application.

"It puts us in a nice position and our destiny is in our own hands. If we go unbeaten over the last three games, it should be enough to qualify."