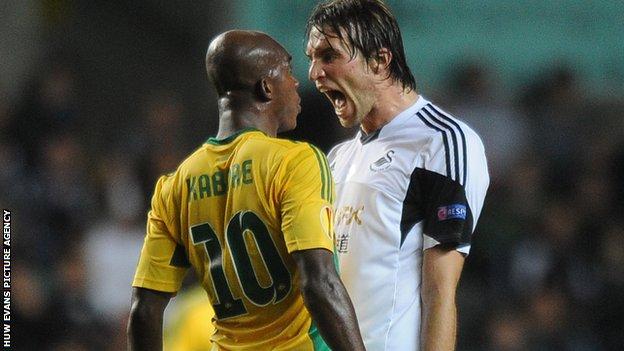 Michu put the hosts 1-0 up with a brave finish midway through the second half.

But Swansea goalkeeper Gerhard Tremmel conceded a 93rd-minute penalty when he brought down substitute Ibrahima Balde in the box.

Former Liverpool striker Cisse stepped up to score the penalty to earn the visitors' first point in the group.

This was the first time Swansea had dropped a point and conceded a goal in Group A.

They lacked their normal fluency but their visitors, who had won just once in their past 10 games, deserve credit.

Manager Michael Laudrup believes the Swans need 10 or 11 points to reach the knockout stages, meaning they need a win in one of their three remaining games to reach his target.

The Welsh side face Krasnodar in the return match on 7 November before games against St Gallen away and Valencia at home.

It took the home side time to find their rhythm, with the visitors offering stubborn resistance in the opening exchanges.

Winger Nathan Dyer's close control in the penalty area was only let down by his tame strike and Swansea's first chance came after a pass from Michu put Jonjo Shelvey through only for the former Liverpool midfielder to push his shot past the post.

The Russian side responded with two chances of their own, with Chico Flores forced to clear a cross from Arsen Khubulov over his own bar before Tremmel had to palm a speculative shot from Maksim Zhavnerchik past the post.

The Swans were lucky not to be down to 10 men after a Kuban break caught their defence flat-footed, with full-back Dwight Tiendalli shown only a yellow card for a foul on Lorenzo Melgarejo as the striker bore down on goal.

Shelvey had another chance just before the break but his free-kick went over the bar.

After the break, Michu fired a speculative shot into the side-netting before putting the home side ahead, finishing off a sweeping move by latching onto Alejandro Pozuelo's chip and bravely sliding the ball home.

But in the last attack of the match, Tremmell brought Balde down in the area and Cisse stepped up to score his side's first goal in the group.