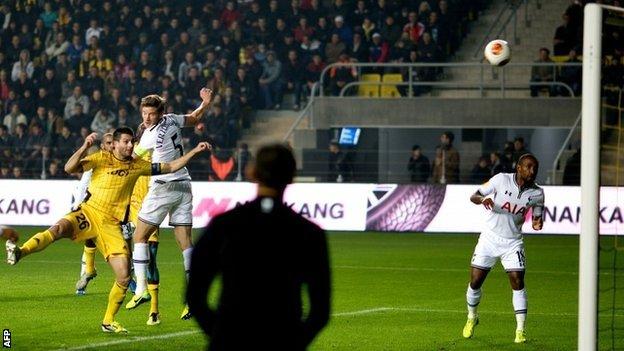 Tottenham Hotspur moved a step closer to the Europa League knockout stages with a hard-earned victory away to Sheriff Tiraspol in Moldova.

Vlad Chiriches produced a superb clearance to deny Henrique Luvannor an equaliser before Aaron Lennon hit a post on his first start for two months.

Jermain Defoe's deflected shot doubled the lead as Spurs made it three wins in three games in Group K.

Having disposed of Norway's Tromso and Russian side Anzhi Makhachkala without conceding a goal, Spurs knew a third group victory would confirm their place in the last 32 - if Anzhi's home clash with Tromso ended level.

Jermain Defoe has scored eight times this season - six of which have come in the qualifying rounds and group stage of the Europa League.

It did not, but Anzhi's 1-0 win means Tottenham will reach the knockout stages if they defeat Sheriff at White Hart Lane on 7 November.

Villas-Boas will hope it is a more comfortable experience than the one he endured at the Sheriff Stadium.

The champions of Moldova have not won a group game in Europe for three years and must have feared the worst when Vertonghen beat captain Miral Samardzic in the air to power Eriksen's 12th-minute cross home, the Belgian's first goal since March.

Yet Vertonghen spent the rest of the half at the other end of the pitch as Sheriff put the Spurs defence under intense pressure.

The hosts would have been level in the 15th minute but for a superb piece of defending by Chiriches, the Romania international denying Luvannor an equaliser after the Brazilian rounded Hugo Lloris and rolled the ball towards an empty net.

Cadu, another Brazilian, had a goal ruled out for offside, Ismail Isa flashed the ball across the face of goal and Luvannor fired over the bar as the home side continued to press.

And there were anxious faces on the Spurs bench when Isa went down in the penalty area under a challenge from Sandro.

But Tottenham survived on a night when the result outweighed the performance - and it might have been more comfortable for Villas-Boas had Lennon marked his first start since the opening weekend of the season with a goal, twice going close to doubling Spurs' lead.

Defoe's goal confirmed the victory, though, and the Londoners reach the midway point of the group stage with a 100% record and yet to concede a goal.

"The game could have easily gone to 1-1 as after we scored they had so many chances to level the score. They looked good on the counter-attack, had some great moments and we have to recognise that.

"A draw would be a fair result, but the second goal is always important in games like this.

"We were fortunate to get the second goal to kill the game, but it could have gone the other way."

"It was a great moment. I was delighted to see it go in because I didn't really have that many chances.

"It's great to equal the record and I'd love to break it at White Hart Lane, that would be great."