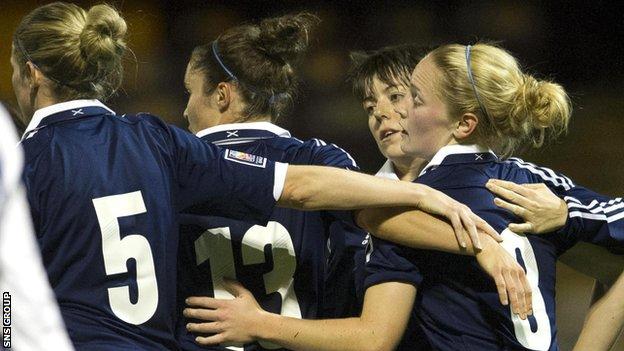 And Crilly is to remain with the squad for the trip to Poland next Thursday.

Arsenal's versatile midfielder Emma Mitchell will definitely miss the first game of the double-header due to a hamstring injury.

Scotland top Group 4 with maximum points after two high-scoring wins against the Faroe Islands and Bosnia-Herzegovina.

The visit to Lanarkshire will be Northern Ireland's opening fixture of the campaign.

Striker Suzanne Mulvey scored one in the 7-2 win in the Faroe Islands and is confident that Scotland can maintain their 100% record in the group.

And, if selected, she will be up against Glasgow City team-mate Julie Nelson at Fir Park.

"We've had goals from all over the pitch, which is always good to see.

"In the past, maybe we have relied on one or two individuals getting the goals for us, now we have so many players who can influence the game.

"Our target is to reach the World Cup and we definitely have the ability to go all the way."

"Scotland are off to a flying start, so it's going to be a big test for us," she said.

"Our aim is to keep on improving. We are ranked fourth in the group, so we're not expected to qualify."