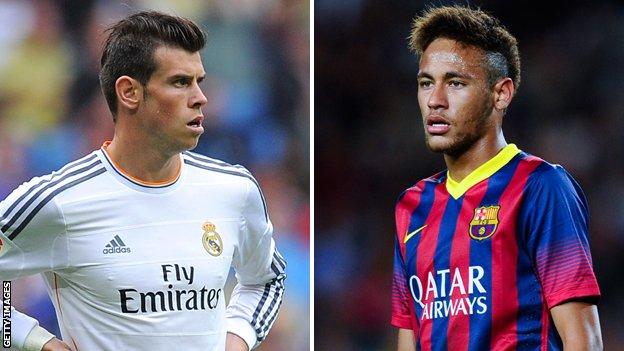 When Neymar and Gareth Bale made their respective summer moves to Barcelona and Real Madrid, they were supposed to provide the missing ingredient in their new teams' quests for domestic and European domination.

So far, it hasn't quite worked out that way, and instead both players are heading into their first Clasico, at the Nou Camp on Saturday, with significant question marks hanging over their heads. Let's take a look at how La Liga's two glamorous summer signings have fared so far.

Neymar had a full summer to prepare for life in Spain following the completion of his long-awaited £48.6m move from Santos in early June.

After starring in the Confederations Cup and joining up with his new club to play a full part in pre-season, he was sensibly eased gradually into the Barcelona team, making his competitive debut with a brief substitute appearance in a 7-0 opening-day rout of Levante.

The Brazilian striker made his first significant contribution with a headed equaliser in the opening leg of the Super Cup against Atletico Madrid, and that proved to be the trophy-winner following a goalless draw in the second leg at the Nou Camp.

By then, Bale hadn't even completed his painfully protracted move from White Hart Lane to the Bernabeu as the lengthy negotiations between Real and Tottenham dragged on throughout the summer, eventually concluding in a record £85m transfer on deadline day.

Predictably, confirmation of Bale's arrival was greeted with euphoria by some sections of the Spanish press - those published in Madrid - and with equal levels of scorn by their Barcelona-based counterparts.

The heavy regional bias inherent within the Spanish sports media ensures reasoned objectivity is always in short supply, and it was difficult to find much balanced analysis of either transfer. Pro-Madrid Marca and AS celebrated Bale as a world-beater and derided Neymar as an overrated show pony, while Catalan papers Mundo Deportivo and Sport did the opposite.

Away from the madhouse of the popular Spanish sports press, the most serious question facing Neymar has been whether his flamboyant skills are compatible with the primary requirement of serving Lionel Messi.

Even before they had played together in a competitive fixture, no less a luminary than highly respected former Barca player and manager Johan Cruyff famously said: "I wouldn't have two captains on the same ship."

Those concerns have not yet been fully addressed, and Neymar's ability to find the right balance between personal creative expression and performing a subservient role to his team's incontestable star player is an ongoing challenge.

Bale is also at the centre of a tactical dilemma, with boss Carlo Ancelotti confronted by the difficult task of accommodating his record signing in a side that already contains three more top-class attacking midfielders who also like to operate from wide positions: Cristiano Ronaldo, Angel Di Maria and Isco.

For now, Ancelotti appears to have decided that the best approach will be to place Bale on the right wing at Di Maria's expense, but that plan has been delayed by a combination of Bale's fitness problems and a sparkling run of form from Di Maria.

The high-profile nature of Bale's arrival at the Bernabeu meant Ancelotti was under pressure to throw his new signing straight into the action, even though the timing of his transfer meant he had been unable to take part in pre-season training.

He started well enough, capping a promising debut with a goal in a 2-2 draw at Villarreal in mid-September. But the following week he was forced to pull out of his scheduled Bernabeu bow against Getafe after suffering groin discomfort during the warm-up, and he has been bothered by injuries ever since, only returning with a pair of brief substitute outings in the past seven days.

While Bale was left frustrated on the sidelines, Neymar was gradually getting on with the job of establishing himself in Barcelona's starting 11.

After a series of promising outings, he was handed greater responsibility when Messi was ruled out with a minor hamstring injury. He took the opportunity, producing influential displays against Celtic and Real Valladolid, performing with eye-catching verve in Messi's central 'false nine' role in the latter game.

It was notable, indeed, that his best performances in a Barcelona shirt came when Messi was absent, allowing him to emerge from the shadows and flourish as the team's main attacking force.

With the Argentina star back in the starting 11 (and scoring) in Tuesday's Champions League draw at AC Milan, Neymar was more subdued and the old questions of his compatibility with Messi re-emerged.

Considering his lack of match action - he has completed just 169 minutes in all competitions so far this season - and the excellent form of Di Maria, it's most likely Bale's involvement at the Nou Camp will come from the bench.

Aside from the irrepressible Ronaldo, Di Maria has been his team's best attacking player this season, scoring the opener in last weekend's home victory over Malaga and providing a lovely assist for Ronaldo against Juventus on Wednesday. Ancelotti would find it difficult to justify dropping him this weekend.

Bale's more realistic hope of starting, in fact, would be if Ancelotti decides to replace the woefully out-of-form Karim Benzema by moving Ronaldo into the central striker position, opening a vacancy on the left wing. But that would be a drastic course of action, with youngster Alvaro Morata waiting in the wings as a more direct replacement for Benzema.

Neymar, on the other hand, is pretty much a guaranteed starter for Barcelona, even if he hasn't quite lived up to the feverish expectation that greeted his arrival in the Catalan capital.

The 21-year-old has certainly not made a bad start to his Barcelona career, scoring three goals and creating six more. But we have seen little of the explosiveness evident during his scintillating performances for Brazil in last summer's Confederations Cup, and before long he will be expected to exert a more consistent attacking influence.

These are still very early days, of course. The new season is just over two months old and it would be unrealistic and unfair to expect Neymar and Bale to immediately become star performers when they are still adjusting to life at a new club and in a new country.

However, Saturday's game could provide the biggest clue to date over their prospects of enjoying success in Spain. And if Bale does play on the right wing, either from the start or as a substitute for Di Maria, he will go directly head to head with Neymar on Barca's left flank; a mouth-watering prospect, indeed.

Until now, neither man has done too much to justify their combined transfer fee of nearly £150m; Saturday's Clasico would be the perfect occasion to start putting that right.