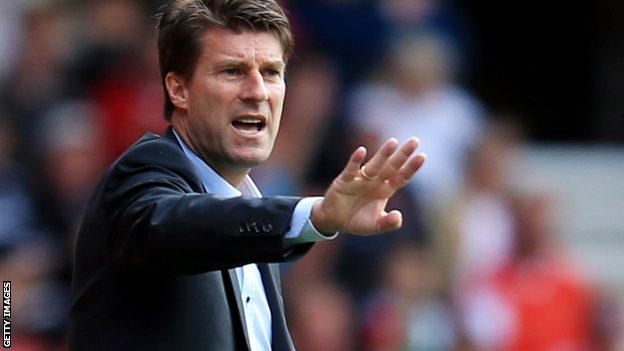 Swansea lead Group A with two wins out of two and host winless Russian side Krasnodar on Thursday.

A third win would put the Swans on the verge of sealing a place in the last 32, but Laudrup says his side will have to be at their best.

Wins over Valencia and St Gallen have put Swansea in a strong position while Krasnodar have not won in their last nine games in all competitions.

But despite their opponents' recent struggles, Swans boss Laudrup says Krasnodar cannot not be taken lightly.

"If you're not playing your best or nearly your best it's difficult against anyone," said Laudrup.

"This team is not a bad team. They have some good players."

Laudrup, who had a spell in Russia as Spartak Moscow coach, says victory at the Liberty Stadium would be another step towards qualifying for the last 32.

The Welsh side face Krasnodar in the return match on 7 November before games against St Gallen away and Valencia at home in December.

"We're at home, we'll be favourites and we're top of the group and want to win for a lot of reasons," Laudrup added.

"The first is that getting to nine points will give us one foot, maybe one and a half feet, in the knock-out stage.

"After this game we have two difficult away games.

"We go to Russia with all the travelling and the time difference, and then Switzerland where there will be cold weather.

"We also have Valencia at home so this is a key game for us.

"I think 10 points should be enough to get us through, but we might need 11."