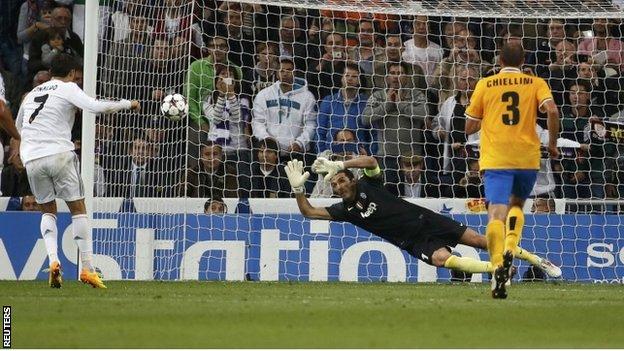 Ronaldo opened the scoring with a dinked finish but Fernando Llorente equalised from close range before Ronaldo scored a penalty, his seventh goal in three Champions League games.

Juve had Giorgio Chiellini sent off before Real's Gareth Bale came on for the last 23 minutes.

Galatasaray went second in Group B, above Juve, by beating FC Copenhagen.

Felipe Melo, Wesley Sneijder and Didier Drogba scored the goals for Roberto Mancini's side in their 3-1 win, with Claudemir scoring a late consolation.

Bayer Leverkusen moved above Shakhtar Donetsk into second place thanks to a 4-0 win over the Ukrainians. Stefan Kiessling scored twice for the Bundesliga side, with Simon Rolfes and Sidney Sam also netting.

Manchester United remain top thanks to their 1-0 win over Real Sociedad, who are still bottom without a point. 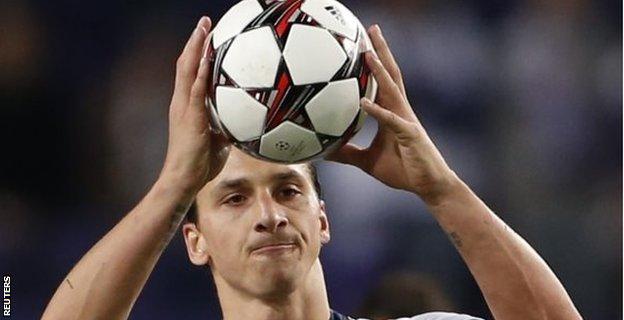 Olympiakos remain second thanks to their 1-1 draw with Benfica, who are third. Alejandro Dominguez gave the Greek side the lead in Portugal but Oscar Cardozo equalised with seven minutes left.

Bayern Munich kept up their 100% record with a 5-0 hammering of Viktoria Plzen, who are still without a point.

A Franck Ribery brace and goals from David Alaba, Bastian Schweinsteiger and Mario Gotze saw the holders to an easy win.