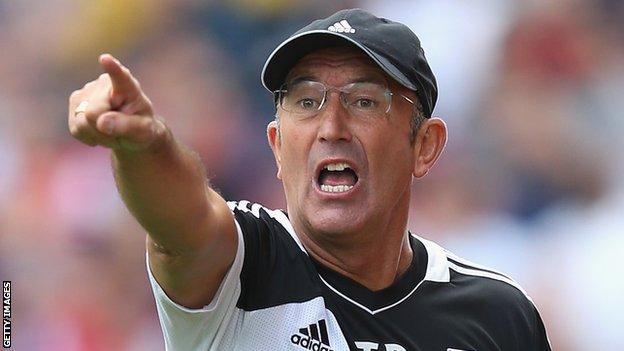 Crystal Palace target Tony Pulis admits he is keen to return to management but insists "the job has to be right."

Pulis, 55, established Stoke in the top flight before leaving in May and is favourite to replace Ian Holloway, who left by mutual consent on Wednesday.

"It was important to take a rest," Pulis told BBC Sport. "I'm really pleased I've had contact from other clubs but they didn't feel right."

"We played a direct style under Steve Coppell in the late 80s and early 90s.

"We had two wingers, two strikers, and a strong midfield which pushed up, played it long, turned them round and scored goals.

"Palace fans are not going to be complaining about style if they can stay in the Premier League, trust me."

Palace are 19th in the Premier League and host leaders Arsenal on Saturday.

Chairman Steve Parish said he is planning to approach Pulis. "He's never been relegated and he's out of work. We'll look," he said.

Pulis was appointed Stoke boss for a second time in 2006 and two years later guided them into the Premier League after a 23-year absence.

Despite not finishing lower than 14th in five seasons in the Premier League, the Welshman left by mutual consent in the summer after being told the club felt the time was right for him to leave. He has said he will consider roles in the Championship.

Stoke's direct and physical style of football often drew criticism from other supporters and managers.

"I'm sure we'll try and contact him and if he's interested we'll have a chat with him and see where we go," Parish told talkSPORT.

"But I don't want to put pressure on anybody. We've started making a list, we'll throw everybody into that and see who we want to see."

If Pulis does take charge at Palace, he will replace a man the south London club did not want to lose.

"I was more than happy to get relegated and come back up with Ian," Parish said. "The word 'sacked' has never been mentioned among the directors.

"I wanted Ian to wake up and say 'sorry about the blip' and stay."

Holloway, 50, guided Palace to the Premier League via the play-offs last season after joining in November, and signed 16 players in the summer.

But the only points his squad were able to gain in eight league matches this term came in the 3-1 victory against fellow strugglers Sunderland on 31 August.

"All I can do is be as honest as I can and wish everyone at the club well," the former Blackpool manager said. "I need a little bit of time to chill out with the family, but I will look out for Palace's scores."