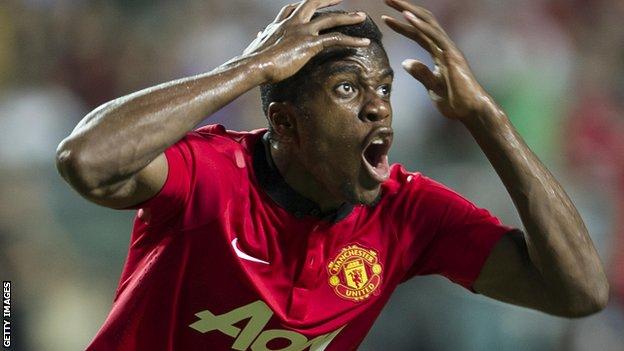 Manchester United have been urged to send winger Wilfried Zaha out on loan, by the scout who discovered him.

Zaha is yet to play a minute of Premier League football for the champions since his £15m move from Crystal Palace.

Dave Webb discovered Zaha playing parks football in south London at the age of 13 while working as a scout for Palace.

"He would benefit from playing more competitive football and a loan move would help with his development," Webb told BBC Sport.

Zaha's only competitive football for United came in the Community Shield victory over Wigan but he has since been frustrated in his attempts to break into the first team.

Webb, who now works as head of player recruitment at AFC Bournemouth, believes 20-year-old Zaha will not let the lack of playing time affect him and has backed him to be a success at Old Trafford.

However, in the short term he feels a loan move would be best for the England winger, who has won two international caps.

"He won't let it affect him too much," added Webb, who talks about the moment he first discovered Zaha in this week's Life of a Scout feature.

"He is realistic and knows he is at a big club and has to compete and fight for his place. It's a lot different club to Crystal Palace. He has a good work ethic and will continue working hard in training.

"He's not getting any football, Wilf is a good character but he just likes to play, so a loan move to another Premier League club would suit him."

Zaha has been linked to Newcastle and Webb feels that would be a good move for him.

"He needs to go to a footballing side which utilises wingers rather than a direct team," he added. "Newcastle play a good style of football and Alan Pardew is a very good manager who likes to play with pace and power and Wilf would benefit from that.

"He needs playing time and to get the confidence but I still think Manchester United was a very good move for him. I do think he is good enough. He has a lot to offer but still has a hell of a lot to do."