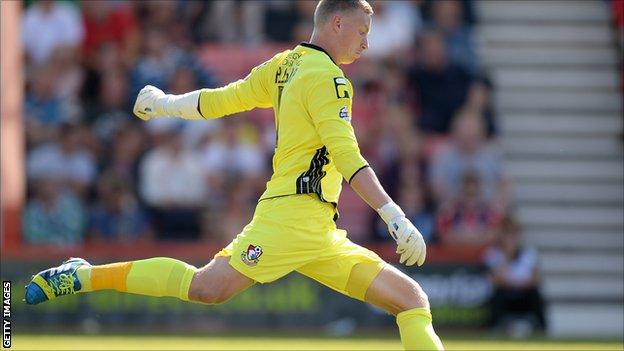 Bournemouth's Ryan Allsop is determined to live up to his 'Rocky' nickname by winning the fight to establish himself as first-choice goalkeeper.

His suspension after a red card against Leeds led to the arrival of Stephen Henderson on loan from West Ham.

"You have setbacks in football, but it's all about how you respond," 21-year-old Allsop told BBC Radio Solent.

He was given his nickname by a nurse after being born prematurely and then contracting meningitis aged two weeks.

Since joining the Cherries in January 2013, Allsop has seen off challenges to his position from Darryl Flahavan and Shwan Jalal.

However, his dismissal against Leeds at the start of October led to Henderson deputising in the 5-2 win over Millwall that followed and the loan signing kept his place for last Saturday's trip to Nottingham Forest.

"It's part of football. I got sent off, that opened the door for someone," said Allsop.

The former Leyton Orient keeper began the Forest game on the bench, but was called into action after only eight minutes following a shoulder injury to Henderson, who has since returned to West Ham.

Despite that, manager Eddie Howe has said he has not ruled out bringing in another loan goalkeeper.

Should another new face arrive at the club, Allsop is ready to battle to keep hold of the jersey.

"I got my head down [after the red card] and went into training fully focused and ready to fight for my place," he said.

"It's always good to have healthy competition and take the positives out of everyone and keep the right attitude.

"I'm still young and learning, and I'm still trying to get that little bit of experience. I want to stay fit and keep in the side and play as many games as possible."