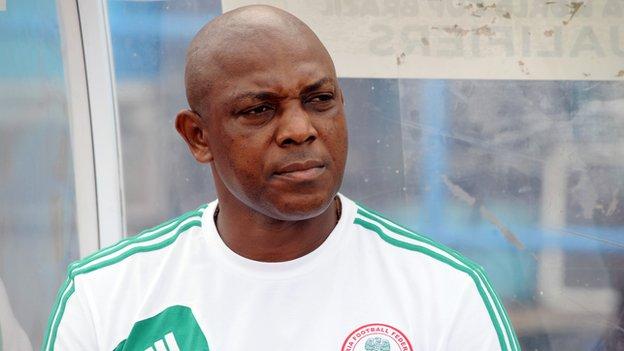 Nigeria coach Stephen Keshi has criticised the Nigeria Football Federation for failing to pay him his salary for seven months.

Keshi, who is preparing his side for November's World Cup play-off second leg against Ethiopia, has not been paid since he led the Super Eagles to the Africa Cup of Nations title in February.

"The lowest point of my career is working and not being paid for seven months," he told BBC Sport. "I have never had this kind of experience before."

The former Togo and Mali coach first revealed to BBC Sport in June that he was owed wages.

And it is not the first time Nigerian coaches have been not been paid; Christian Chukwu, Shaibu Amodu, Samson Siasia, Austin Eguavoen, John Obuh and Eucharia Uche have all previously complained about outstanding salaries in the recent past.

Keshi feels the situation is disrespectful and unacceptable.

"In Mali, they will never owe you; your salary will hit your account before the end of every month. It was the same thing in Togo," he said.

"Owing me up to eight months makes me feel I am not being appreciated, it is like they think I am being favoured in what I am doing.

"I am not being favoured. I am giving everything I have to the job - I need to be respected and given my pay."

Keshi's comments come after a statement credited to the Nigeria Football Federation said that the allowances and bonuses the team's coaches earn are enough to sustain them.

"I don't like discussing money issues and if there is any NFF member who said we can work for free, then I will want to speak with him face to face," Keshi said.

"If they say we can work for free and that they are not going to pay, so be it.

"I can't have my family abroad and I will be in debt because I have not been paid for seven months and somebody is saying we should not complain."

The NFF, which is in in serious financial difficulty, also owes money to assistant coach Daniel Amokachi and goalkeeper trainer Ike Shorunmu.

The football authority, which receives its funding from the sports ministry, has acknowledged the debts owed to the coaches but says they will have to be patient.

One NFF official, who did want to be named, told BBC Sport: "It's embarrassing to be dealing with something like this ahead of a crucial game. Sadly, our terrible financial situation is solely responsible for this.

"We are hopeful this will be resolved before the game against Ethiopia."

Nigeria will face Ethiopia in Calabar on 16 November and are favourites to progress to next year's tournament in Brazil, having won the first leg 2-1.