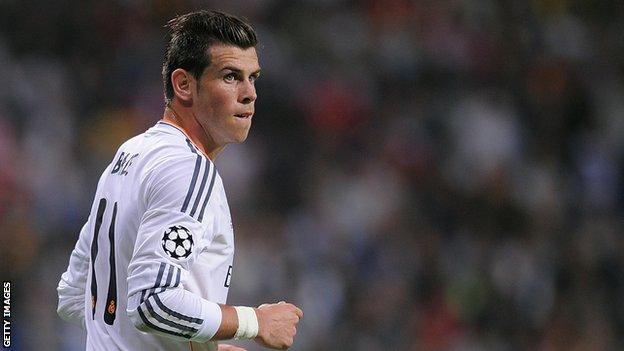 Bale, 24, has endured an injury-disrupted spell since making a world-record £85m summer move from Tottenham.

He came off the bench in the Champions League win against Juventus, but may play a bigger role at the Nou Camp.

"It is important to get match time, his fitness is better and he is ready to play a match now," the Italian said.

"Bale likes to play on the right and when he plays he will play there."

The Welshman has started only one game for Real this season, after arriving at the Bernabeu with a foot injury that hampered his pre-season schedule while at Spurs.

A thigh problem then ruled him out of several club matches and the recent 2014 World Cup qualifiers.

Bale won a penalty after coming on as a substitute in the 2-0 win against Malaga on Saturday and that result saw Real close to within two points of La Liga leaders Barca following their 0-0 draw with Osasuna.

"We have to take advantage of what happened in the last match," Real goalkeeper Iker Casillas said. "A win would put us joint first, depending on what Atletico Madrid do [they host Real Betis on Sunday]."

Barca dropped their first points of the season in Pamplona and centre-back Gerard Pique is a fitness concern for Saturday.

The defender picked up a hamstring strain in Tuesday's 1-1 Champions League draw at AC Milan. Captain Carles Puyol could take Pique's place, after he ended a seven-month injury lay-off against Osasuna.