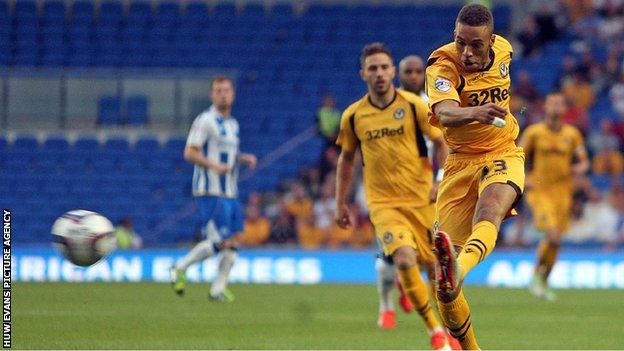 Newport striker Christian Jolley is in line to make his return to action against Southend at Rodney Parade on Saturday.

Jolley has not played since September 14 after undergoing surgery to cure a groin injury.

He was on the bench for the 0-0 draw at Plymouth on Tuesday.

"We were aiming for Southend anyway, so hopefully I'll be available to play some part come Saturday," he said.

O'Connor has not played so far this season and had a second operation on a groin injury on Tuesday which will keep him out for a further eight weeks.

However, newly-promoted Newport are ninth in League Two with 20 points from 13 games - a level of success that has impressed Jolley.

"The starting 11 who were promoted at the end of last season, I don't think we've started with that team so far this season, so it's been a massive credit to the boys," he said.

"So I've got to work hard and get my head down.

"But it's good in a way because it's not putting me under pressure because the boys are flying, so I can make sure I get myself right and make sure I don't break down the rest of the year."

"We're delighted to have tied them down until 2015," said manager Justin Edinburgh.

"They are two players who have excelled this season, it's very much deserved and they have bright futures in front of them."