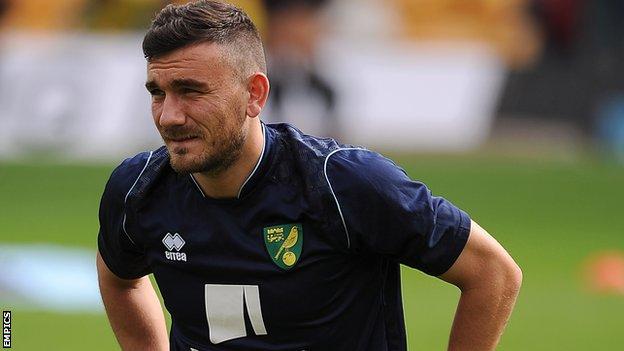 Norwich City winger Robert Snodgrass says he will not let his lack of goals and assists affect his confidence.

"I'll keep going. That's one thing about myself - I'll roll my sleeves up and keep going. I don't care what people say," he told BBC Radio Norfolk.

"The physical side of my game - I know I'm hitting the stats I want to hit, but I want more assists and goals."

The Scotland international's only goal this term came in the World Cup qualifier against Croatia earlier this month.

"At the Bury game (in the League Cup, two matches earlier) it was me and Johan Elmander on the penalties," said Snodgrass.

"There was no conversation at all that said Ricky was on the penalties. At the time I felt confident. I've scored penalties before and I thought I could take it."

Snodgrass, who celebrated the birth of his child two weeks ago, is hopeful of making an impact for the Canaries, who head into Saturday's clash against Cardiff one place below their 17th-placed opponents.

"It's been a bit up and down. I've been so close to scoring three or four goals," he added.

"I'm getting in the right positions. My physical stats are now good. I'd like to have a few more assists and goals. The assists are maybe out of my hands - it's maybe up to other players to finish."