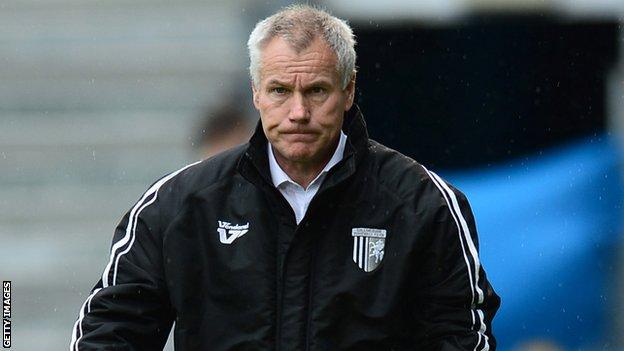 Gillingham interim manager Peter Taylor says he could be replaced at any time by chairman Paul Scally.

Taylor took charge last week after the sacking of Martin Allen while Scally searches for a permanent boss.

"People think I have agreed with Paul that it is a month or even longer.

"That is honestly not true. I am looking after it as interim manager. If Paul sees a CV that he likes he could bring a manager in tomorrow," 60-year-old Taylor told BBC Radio Kent.

"I have taken it on the nose in that way. There is no set time I have got here."

Scally says the process of appointing a new manager could take four to five weeks and Taylor has already expressed his interest in remaining at Priestfield Stadium in the long term.

Taylor picked up his first win in his second match in charge when they beat Notts County 2-1 on Tuesday.

"We are looking to play more football and the structure of the team is set up differently.

"The lads have really enjoyed it and we are fully behind him. He has got some ideas, but he is not going to bombard us straight away.

"We are starting to take things on board and I have been very impressed with him. He knows what he wants."

We'd love to get the results that get him the job

Barrett says he and the rest of the playing squad hope the former Brighton, and Leicester and Hull manager is appointed on a permanent basis.

"As players you don't want change all the time," the 33-year-old defender said.

"We want Peter to get the job. We'd love to get the results that get him the job.

"We will be trying everything we can to make sure we get the results for Peter, the football club and ourselves.

"If that is good enough and the chairman then wants to offer Peter the job full-time, then fantastic."

Taylor favours a passing game and wants his side to play with attacking flair but admitted it will "take a bit of time" for the players to adapt to his ideas.

"I have seen progress in the two games and in training," Taylor said.

"The players are desperate to do well and we know we have got to be as hard to play against as possible.

"We know we are not going to be the best team in League One so we have to make up for certain things by spirit, legs and yards."