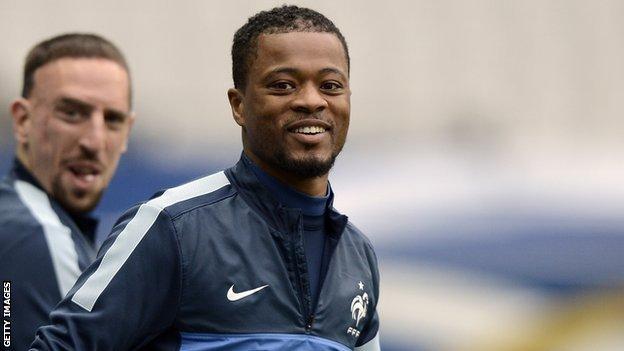 Patrice Evra will be available for France's World Cup play-off matches after being cleared over comments he made on French television last week.

But Evra, 32, was cleared by the French Football Federation (FFF) and can now face Ukraine on 15 and 19 November

"Patrice Evra remains at the disposal of the national coach," the FFF stated.

"Evra, for his part, wanted to reiterate his commitment to the team and his love of the blue France jersey, and promised he had not wanted to damage French football or its image in any way."

The FFF suggested the left-back was tired and angry when he made the comments to French television station TF1.

"He eventually cracked after a long interview skilfully conducted to wind him up," the statement added.

France finished second to Spain in their World Cup qualifying group to secure a place in the play-offs.

Lizarazu and his fellow pundits criticised an impromptu half-time talk Evra gave his team-mates during the qualifying game against Belarus in September, which France won 4-2.

Evra said: "People have a good impression of me. It won't be these tramps who dirty my image.

"There are some pundits with whom I will soon settle my differences with. They want to sell a lie to the French people that Evra is disliked. But that is not the case at all.

Lizarazu, 43, replied: "He blames us for dirtying his image but he is doing a great job of it himself."

Evra was banned for five international games by the FFF in 2010 after the national side, which he captained, refused to train during the World Cup after striker Nicolas Anelka was sent home for insulting coach Raymond Domenech.