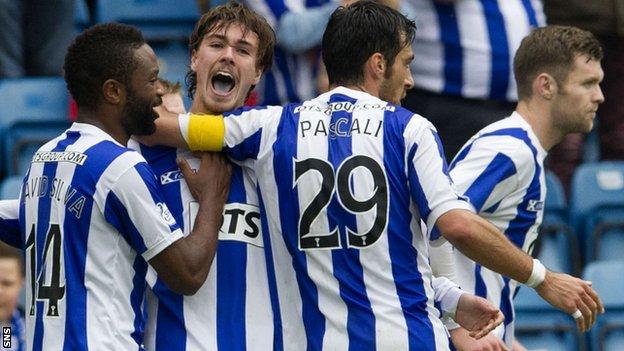 Having picked up their , the Killie boss wants them to make it two in a row on home soil against Hearts.

"We've got to make Rugby Park a hard place to come and play," said Johnston ahead of Saturday's match in the Scottish Premiership.

"We need to make sure our form is good and we're picking up results."

The Ayrshire side will be without , with the Nigerian midfielder awaiting the approval of a specialist for a return to action after collapsing in the match with County.

"Rabiu was in yesterday and was looking fine," confirmed Johnston.

"But we're still waiting on the specialist to look at his test results and give us the all-clear before he comes back to training.

"The results are being sent to a specialist who is used to dealing with sports people and obviously you can't take any chances so we're just waiting for their advice."

Johnston sees parallels between his early months as Rugby Park boss and that of Mixu Paatelainen.

The Finnish boss had only picked up two league wins at this stage of the season three years ago before beating Hearts, which marked the beginning of a climb up the league table.

"I remember it was the game at Tynecastle that turned Kilmarnock's season round," reflected Johnston.

"It's amazing the difference a positive result can make in a good team performance.

"So we've got to make sure the win we had last week kick-starts our season.

"The position we are in every game is a big one. We've just got to make sure we get results. Sometimes we've got to play differently from the way we'd like.

"We've obviously got a lot less of a budget than Mixu had, so that makes a difference as well, particularly with the quality of players he had. But it'll take time to turn things round."

Killie are second bottom of the Scottish Premiership, 13 points ahead of Hearts.

Some Killie fans have been boycotting home matches in protest at chairman Michael Johnston's stewardship of club.

But last week they were back and the manager, who was grateful for their support, is looking for a repeat this week.

"It shows you the difference it makes," added Johnston. "They still had their protest, but they got right behind the players as well.

"You could see the boys playing with a bit of confidence because the fans got behind them.

"It's important you get into that winning mentality."