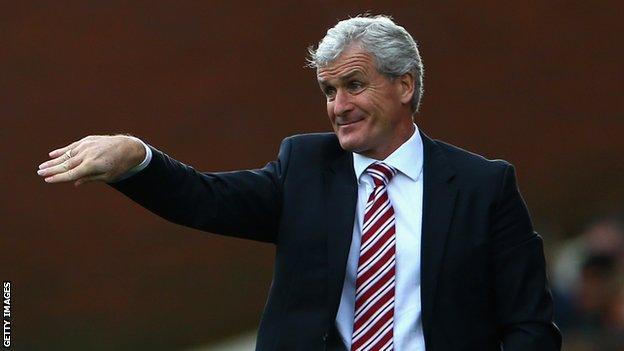 Manchester United look "a little bit vulnerable" and cannot afford to lose many more games if they are to retain the title, says Stoke boss Mark Hughes.

United have lost three of their opening eight league games under David Moyes.

Hughes, 49, said: "They can't afford any more slip-ups, but invariably when people question Manchester United they come back with the answers."

But United have accumulated just 11 points so far this season under Moyes, who succeeded Ferguson in the summer.

"There are only a certain amount of games you can lose," Hughes said. "Five or six enables you to still be in the title race. Lose any more than six then you make it very difficult, nigh on impossible, for yourself.

"They've lost three and maybe they are a little bit vulnerable at the moment."

Stoke have also had a disappointing start to the season, lying just one point above the relegation zone in 16th place having scored just four league goals, fewer than any other team in the top flight.

But Hughes, who replaced Tony Pulis as Stoke manager in the summer, is hopeful ahead of Saturday's game.

"West Brom have won there so it's more than possible that we can get a positive result," Hughes said.

"You can't go to Old Trafford and be apprehensive. You have to be positive and have a go. If we do that, let's see what happens, but the expectation from ourselves and our fans is high."