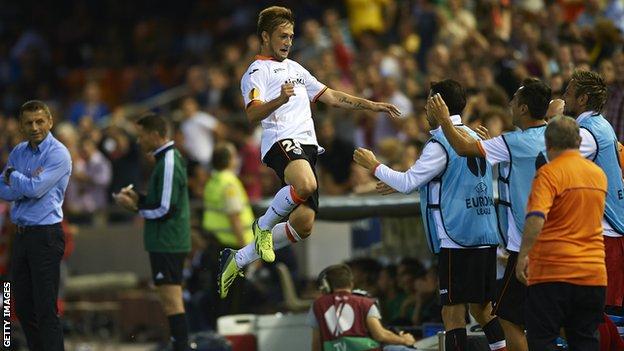 Valencia thrashed St Gallen to cut Swansea's lead at the top of Group A of the Europa League to one point.

Winger Federico Cartabia scored twice in the 5-1 rout at the Mestalla.

But Lazio were held to a 0-0 draw at Apollon Limassol to fall two points behind Group J leaders Trabzonspor, who beat Legia Warsaw 2-0.

Fiorentina, inspired by their impressive Serie A triumph against Juventus at the weekend, secured a comfortable 3-0 victory against Romanians Pandurii Targu-Jiu in Group E.

Winger Joaquin and striker Ryder Matos netted in the first half, before Juan Cuadrado found the top corner to complete the scoring.

Bulgaria's Ludogorets Razgrad stretched their advantage at the top of Group B to five points thanks to Hristo Zlatinski's free-kick against Ukrainians Chornomorets Odesa, while second-placed PSV Eindhoven played out a frustrating goalless draw at Dinamo Zagreb.

In Group F, Vaclav Kadlec and Alexander Meier struck either side of the dismissal of Maccabi Tel-Aviv forward Tal Ben Haim as Eintrachtmoved to within touching distance of progression to the round of 32 with a 2-0 victory.

In an all-action Group C game in which three players were sent off, Salzburg claimed a 2-1 win against Standard Liege.

Both sides were reduced to 10 men in the first half as Mehdi Carcela-Gonzalez and Sadio Mane were dismissed with Standard's Kanu shown a red card after the interval.

The winger rounded replacement goalkeeper Lukas Hrosso, who came on after Premysl Kovar was dismissed, to slot in. The goal kept Sevilla two points ahead of their Czech opponents.

It is still all to play for in Group I, after 1-0 victories for Lyon and Real Betis against HNK Rijeka and Vitoria Guimaraes respectively.