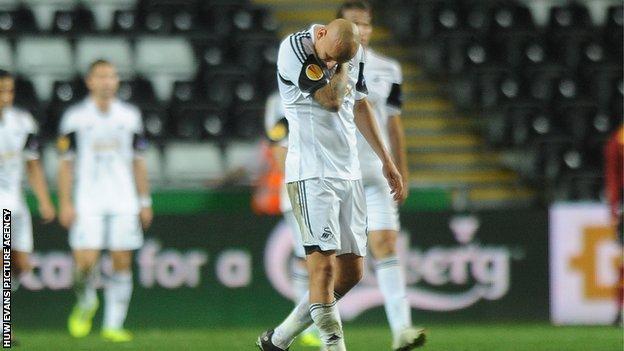 Manager Michael Laudrup said Swansea's draw with Kuban Krasnodar was a fair result, despite the frustration of seeing his side concede a last-minute equaliser.

Michu gave the Swans the lead before Djibril Cisse's penalty made it 1-1.

The result meant Swansea dropped points for the first time in their debut Europa League campaign.

"If you look at the game overall, I have to admit the draw was a fair result," said Laudrup

When you are 1-0 up in injury-time and you have the ball, you think it's done

Swansea remain top of Group A, one point ahead of Valencia with three games remaining. Laudrup has stated he believes 10 or 11 points will ensure they qualify for the knockout stages.

The Dane conceded he was frustrated by his side's inability to hold on for maximum points but praised the Russians' performance.

"When you are 1-0 up in injury-time and you have the ball, you think it's done," said Laudrup.

"If you look at the way we conceded the goal - a penalty after a counter-attack in injury-time - it is frustrating.

"We had a lot of possession, like we do, but we did not create that many chances. They were very dangerous on the counter-attack, which we knew before the game.

"In the first half, they had three or four very dangerous counter-attacks. So overall a draw is fair."

Laudrup refused to blame any of his players for the penalty, despite Jonjo Shelvey losing the ball in midfield and goalkeeper Gerhard Tremmel bringing down substitute Ibrahima Balde for the spot-kick.

"We don't point fingers at anybody here," said Laudrup. "We are still learning and very few of my players have played international games.

"Yes, we play in the Premier League but this is a process and I think this will give us a lot of experience. To get experience you have to make mistakes, but you learn from them."