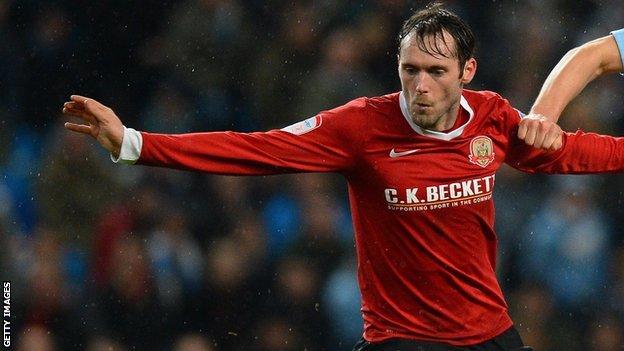 The hosts took the lead through Daryl Murphy's powerful header from a corner just before the break.

But O'Brien levelled with 20 minutes remaining when he latched on to a loose ball just inside the box and slotted his volley into the bottom corner.

Ipswich left-back Aaron Cresswell was sent off on the final whistle for foul and abusive language.

The dismissal came moments after striker Frank Nouble was left incensed when referee Andy D'Urso waved away his late shouts for a penalty.

The forward had just missed out on connecting with Jay Tabb's shot as the match entered injury time.

Ipswich manager Mick McCarthy was celebrating his one-year anniversary in charge of the Tractor Boys against hometown club Barnsley, where he started his playing career

And he was left fuming after tumbling over a Jean-Yves M'voto challenge in the penalty area.

The result leaves Barnsley still in the relegation zone with 10 points from 14 games, while Ipswich are 10th on 17 points.

An action-packed last quarter was in contrast to a flat opening which saw neither side threaten to break the deadlock.

Slowly the match started to liven up with the home side shading proceedings.

Paul Anderson shot over the crossbar from 18 yards after a neat chest control from Town top scorer David McGoldrick before Cresswell's dangerous low cross was deflected away by Jack Butland.

The pressure finally paid off four minutes before the interval when Cresswell's corner was met by the unmarked Murphy who thumped home his fourth goal of the season.

Out of nothing, the visitors went close to grabbing an equaliser on 50 minutes when Butland's long kick was neatly laid off by Marcus Pedersen and Chris O'Grady's powerful shot from 20 yards was parried around the post by Dean Gerken.

The chance galvanised the Tykes who went on to enjoy the majority of possession.

An equaliser looked likely and with 20 minutes left, Barnsley finally made the breakthrough.

Four minutes from time, Jason Scotland had a chance to win the match for Barnsley but his shot could only find the side-netting after he was able to control Tom Kennedy's deep free-kick and find space in the penalty area.

Moments later, they were indebted to midfielder Cole Skuse who twice cleared the danger from inside his own six-yard area before O'Brien should have done better when he found space in the area but his toe-poke was comfortably gathered by Gerken.

The match ended with Cresswell sent off on the final whistle when he confronted the referee.

"I felt for a few weeks that we were on the verge of a good run. Our defending is improving and we have had a settled team which has certainly helped.

"We went toe-to-toe with a quality team in Ipswich and deserved a point, if not more.

"Jim O'Brien was the catalyst for us to get on the front foot.

"He has trained excellently and he has supported the side while being out of the team. I was delighted with his performance."

On the home fans booing the team at the end of the match: "I think they should put a bit of pressure on us. We should be in a better position and we have not played well in the last two games.

"I am disappointed as we were all right in the first half but they turned it around on us in the second half.

"I will look at the reasons why, but in the end I have to be happy with the point as we could have lost that match."

On the penalty appeal: "I have not seen an angle where it looks like a penalty.

"We suddenly had five or 10 minutes where we were baying for blood and anywhere in the world would have shouted for a penalty. But it was not for me."