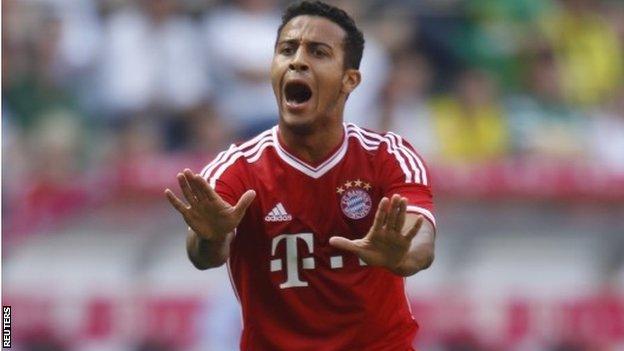 The 22-year-old Spain international suffered the injury in only his second match for the European champions following his £21.6m switch from Barcelona.

Manchester United had been heavily linked with Thiago but he opted to join former Barca boss Pep Guardiola instead.

No date has been set for his return.

A club statement read: "A surgical screw was removed from his right leg two weeks ago and the Spain international returned to the Sabener Strasse training ground on Thursday for a light shakedown.

"After a 15-minute jog, Thiago and sports rehab coach Thomas Wilhelmi returned to the performance centre for more exercise to stabilise and rebuild the player's right ankle muscles."

Meanwhile, Bayern striker Claudio Pizarro is out for four to six weeks after picking up a thigh injury in training on Thursday.