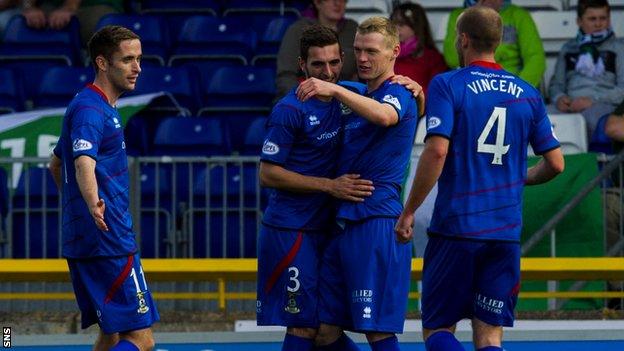 Inverness Caledonian Thistle posted a modest gain of £22,000 on the financial year to 31 May; the club's first profit since 2007.

The results are a marked improvement on last year's deficit of £379,000.

Last season, the Highlanders enjoyed their highest ever placing in the top flight, finishing fourth, despite trimming the wage bill for players.

And the club say they continue to operate without any long-term debt or overdraft facilities.

There was no cash generated by player sales, with Owain Tudor Jones and Andrew Shinnie among those leaving the club under freedom of contract, but clinching fourth-place resulted in a healthy increase in prize money after a 10th-place finish in 2011/12.

Revenue was also boosted by a run to the League Cup semi-finals.

"At the start of this financial year, the board in conjunction with the management team had to make some serious cuts to the playing budget following consecutive years of losses which, though manageable, could not be sustained in the long term," said chairman Kenny Cameron.

"It is testament to the shrewdness and undoubted skills in 'talent spotting' of Terry Butcher and Maurice Malpas, ably assisted by head scout Steve Marsella, that, having made the cuts in the playing budget, the team excelled under their leadership."

"Our strategy and business model have served us well," added Cameron.

"We have substantially reduced our cost base. We have excellent people and a robust strategy that will ensure we continue to improve as a club and a business and strive for the long-term sustainability of the company.