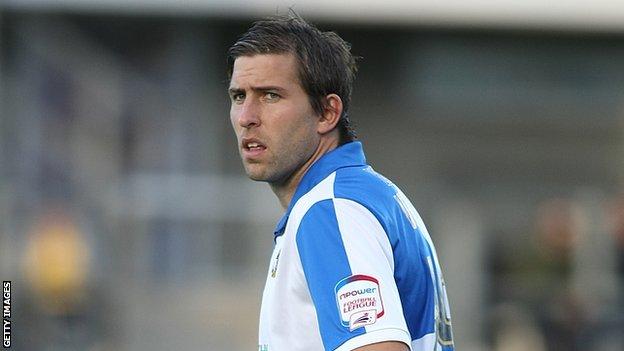 Former Brighton & Hove Albion, Celtic and Bristol Rovers defender Adam Virgo has announced his retirement at the age of 30 because of a knee injury.

Virgo was released by Rovers this summer following an injury-hit two years at the Memorial Stadium.

He came through the youth academy at Brighton and scored 10 goals in 82 appearances before joining Celtic for £1.5m in summer 2005.

He rejoined Albion three years later and also had a spell with Yeovil.

He played a pre-season game for Crawley this summer but his knee condition stopped him from finding a new club.

"I went up for a header and when I landed the pain was just excruciating," Virgo told the Argus newspaper.

He is best remembered by Brighton fans for scoring a diving header at the end of extra time in their Division Two [now League One] play-off semi-final second leg against Swindon in May 2004.

His goal forced a penalty shoot-out which the Seagulls won, and the Sussex club were eventually promoted following a play-off final win over Bristol City at the Millennium Stadium.

Virgo was largely used up front by Brighton manager Mark McGhee the following season and he scored eight goals in 36 Championship appearances before sealing a move to Celtic.

He had loan spells with Coventry and Colchester during his time at Celtic Park and moved back to Withdean Stadium for a second spell with Brighton in 2008.

"Overwhelmed with messages from Ex team mates and supporters thanks for the memories #beenemotional," Virgo posted on his Twitter page.