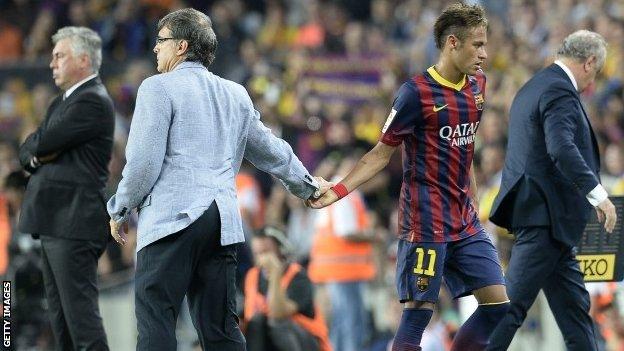 Barcelona boss Gerardo Martino said the performance levels of both his team and key player Lionel Messi dipped during the 2-1 win over Real Madrid.

Clasico debutant Neymar gave the hosts an early lead and Alexis Sanchez added another after half-time before Jese Rodriguez scored a late consolation.

"We played well at first but tailed off, and the same is true of Messi," said the Argentine coach.

"But he worked hard and I rate his performance."

The 50-year-old, who replaced Tito Vilanova in the summer, added: "During 20 minutes in the second half I could see that we were too deep and giving the initiative to Madrid.

"We made changes to modify this and after that we counter-attacked better and had more control in the final 15 minutes.

"If Messi, and the other players, can continue playing this well, we're going to have a good season."

The victory moved leaders Barcelona six points clear of their rivals in La Liga after only 10 games. Real are third on 22 points - two behind city rivals Atletico, who have played one game fewer.

"The win is good for our spirits, and is more important in that sense than mathematically," added Martino.

"There is still 60% of the league season left, and Madrid and Atletico are close to us - they can still make up the difference."