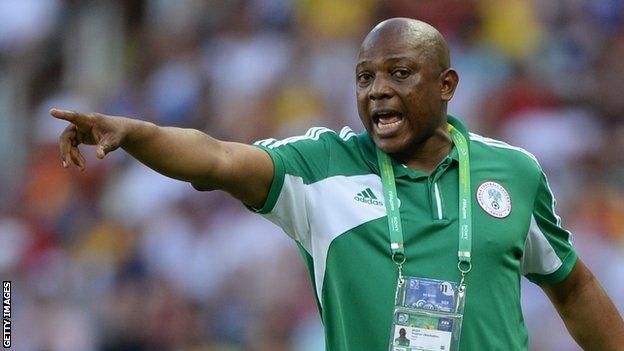 Keshi, who is preparing Nigeria for November's World Cup play-off second leg against Ethiopia, revealed to BBC Sport he has not been paid since he led the Super Eagles to the Africa Cup of Nations title in February.

"This is unacceptable," NSC director general Elegbeleye told KickOffNigeria. "And we've queried it. I don't know why [the NFF] should owe the national coach.

"As far as I am concerned, it is a national embarrassment."

The NFF, which is in in serious financial difficulty, also owes money to assistant coach Daniel Amokachi and goalkeeper trainer Ike Shorunmu.

The football authority, which receives its funding from the sports ministry, has acknowledged the debts owed to the coaches but says they will have to be patient.

"If they are having challenges with raising money, they should have come to us. But they have not complained to us that they cannot pay," Elegbeleye explained.

"The coach is not like the secretariat staff, he is on a contract. Because their staff have not been paid does not mean the national coach should not be paid.

"If he gets sacked today, there is no gratuity, so why should he suffer?"

It is not the first time Nigerian coaches have been not been paid.

Nigeria will face Ethiopia in Calabar on 16 November and are favourites to progress to next year's tournament in Brazil, having won the first leg 2-1.