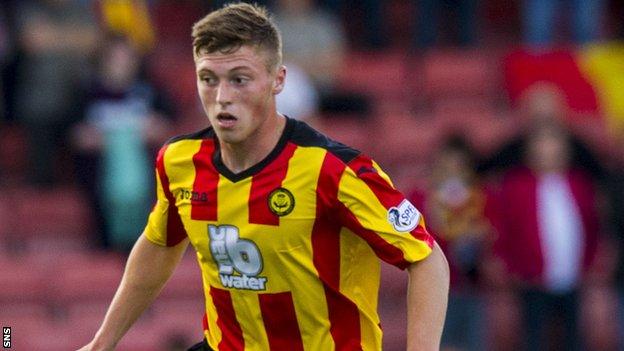 The 19-year-old was sent off in a midweek Under-20s match, which incurs an automatic two-match suspension.

But he has also been served with a notice of complaint by the Scottish FA after being cited for "punching a player on the opposing team".

The charge adds: "thereafter kicking him repeatedly on the head and body".

Fraser has made four first-team appearances since joining on loan from Bolton and his excessive misconduct case will be decided at a disciplinary hearing at Hampden on 14 November.

I got the match official's report yesterday and it doesn't make good reading.

Dunfermline's Chris Kane is Fraser's alleged victim and he was also sent off by referee Grant Irvine, along with Thistle's Dale Keenan.

"I wasn't at the game which is a blow as I would have liked to have seen it myself," said Archibald.

"I got the match official's report yesterday and it doesn't make good reading.

"I spoke to Gary. He just said the red mist came down and he retaliated. He knows he let himself down.

"He went in and apologised to the player and the referee but all we can do is wait for the hearing.

"I think he will get a lengthy ban but some reports are saying a year out of football.

"I don't know where that is coming from. I have seen a lot of people doing a lot worse than that and get a lot less so I think that is madness.

"He is a young lad, nobody wants to see a young lad not playing football for a year."