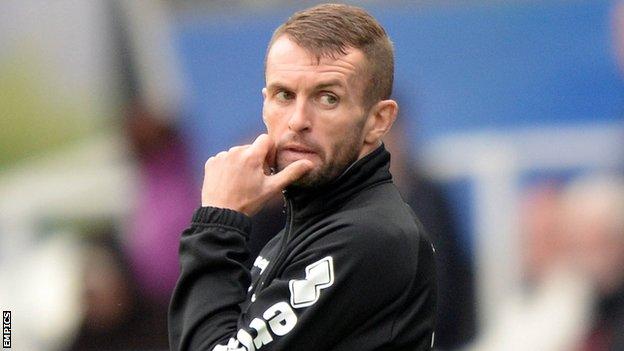 With five attacking players sidelined, the Seagulls have brought in striker Leroy Lita on loan from Swansea.

"We are working as hard off the pitch as we are on the pitch. We have been unbelievably active in trying to bring someone in," he told BBC Sussex.

"Whether that brings fruition is another thing. It hasn't been easy."

Brighton have three senior strikers injured, with Leo Ulloa (foot) out until December, Craig Mackail-Smith suffering an ankle problem on his comeback from an Achilles injury and Will Hoskins (knee ligament damage) not due back until the spring.

Winger Kazenga LuaLua (knee) is out for two months, holding midfielder Liam Bridcutt (hernia) has been sidelined since August, while Andrea Orlandi (knee) hopes to return next month after surgery.

BBC Sussex understands Brighton missed out on the loan signing of Nottingham Forest striker Dexter Blackstock, who joined Leeds this week, and Jones says there are a number of hidden factors in the transfer market.

"Obviously the bits of quality you need sometimes don't come, don't want to leave their clubs or prefer other things," Jones said.

"It is difficult and there are lots of things before you sign a player. It's not 'we want you, we'll pay your wages, do you want to come?'.

"There's geography, family, other teams wanting them, people paying them more - who knows?

"Everyone at the club is active in strengthening the side.

"We want to bring someone in that will actually strengthen it and not a little bit part stop-gap.

"We are Brighton and we don't do that."

However Jones would not be drawn on how close midfielders Kemy Agustien (fitness), Bridcutt and Orlandi are to returning to first-team action.

"They are a probably week closer than they were last week but how close they are is another thing," he said.

"I don't want to say someone is a week away because six weeks down the line they could still not be fit. I'd look a bit of an idiot.

"They are a week closer than they were. We pray."