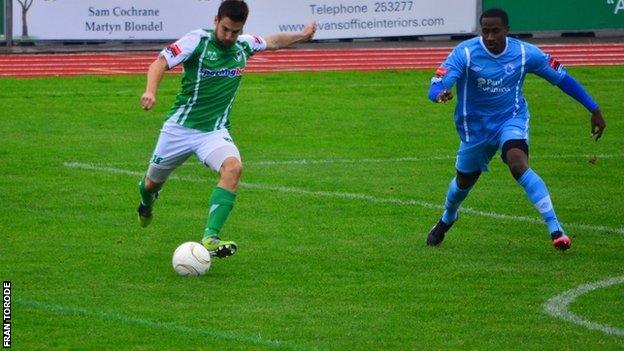 Guernsey FC boss Tony Vance says his players have to guard against losing focus after being knocked out of both cup competitions in quick succession.

The Green Lions have been knocked out of the FA Cup and the FA Trophy in recent weeks and Vance wants to make sure their league form does not suffer.

"We have to use that to our advantage," he told BBC Guernsey.

We do play offensively but we have learned to adapt

"It's important we keep focused, keep some momentum going and keep ourselves in the chasing pack."

Vance added: "I've been involved too many times when you've been knocked out of the cups, you try to concentrate on the league and then come February or March time you're in the middle of the league and you're basically out of anything.

"We mustn't find ourselves in that situation."

Guernsey face Worthing at Footes Lane on Saturday, a team who are four points above them in the league table having played four games more.

"Anyone can beat anyone in this league," said Vance.

"We've played teams like Tooting who are a couple of positions off the bottom and on the night they were exceptional. We were very lucky to come away with a draw."

Guernsey have the second-best defensive record in the league having conceded 11 goals this season, and Vance admitted his team had needed to adapt from their traditional attacking default.

"It's unusual for us to have the best defensive record," said Vance.

"We do play offensively but we have learned to adapt given out start to the season. I don't want to single out individuals but [goalkeeper] Chris Tardif would be one of the reasons we've got such a strong defensive record."