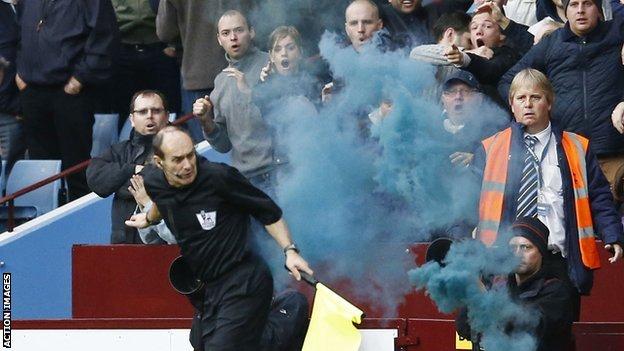 Police dogs will search fans for flares and smoke bombs at Sunday's Tyne-Wear derby at the Stadium of Light.

Sunderland and Newcastle fans have been warned that anyone carrying such devices to the game will be arrested.

Sunderland security manager Paul Weir said: "Police will have pyro-detecting dogs and queuing fans will be checked outside the stadium, and on entry."

Assistant referee David Bryan was hit by a flare during Sunday's match between Aston Villa and Tottenham.

On Friday it was announced that Fifa has started disciplinary proceedings against the English and Polish football associations after flares were lit during October's World Cup qualifier at Wembley.

Mr Weir added: "We will be searching all the away fans and certain sections of our crowd where there is potential for these things to go off.

"There is always going to be the possibility that people will smuggle in smoke grenades and flares."

Barry Rogerson, 45, from Bedlington, Northumberland, was jailed for a year at Newcastle Crown Court on Thursday for punching a police horse.

The police horse, Bud, and another horse were attacked during scuffles after the match.

Mr Weir added: "Both police horses will be on duty this week, so that particular tale has a happy ending."