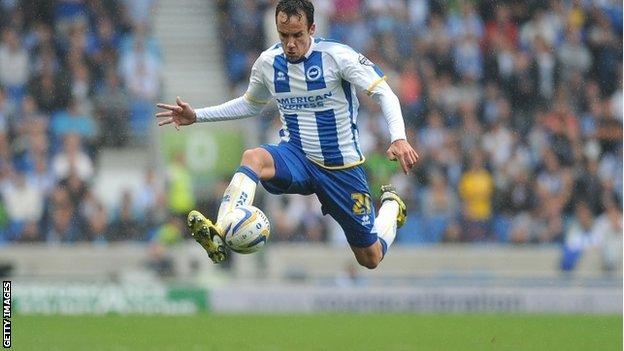 After Chris Brown had levelled for the hosts with a neat near-post finish, on-loan Lita bundled home from close range to restore Brighton's advantage.

Lopez capped the victory with a swerving free-kick past Ross Turnbull.

The win takes Brighton up to 12th, but Rovers lie only one point above the relegation zone with matches against the bottom two sides - Barnsley and Yeovil - next.

Rovers started brightly, however, with Mark Duffy sending a free-kick narrowly over the top after James Coppinger was fouled.

After Forster-Caskey's fierce effort had given the visitors the lead, Brighton goalkeeper Tomasz Kuszczak was called on to make a save from another effort from distance from Duffy.

But Albion gradually gained the upper hand and Stephen Ward should have done better when afforded a free header by some lax Doncaster marking.

Rovers forced their back way into the game with on-loan Queens Park Rangers left-back Yun Suk-Young going close before Brown applied the finishing touch to Duffy's cross to equalise.

However, the visitors were not to be denied and Lita gleefully smashed home a loose ball before fellow substitute Lopez curled home with the last kick of normal time.

Doncaster boss Paul Dickov: "After we had equalised it looked like we might go on and win the game but we conceded a really scrappy second goal after the ball had bounced about in the area following a corner.

"The other two we couldn't do much about because they were a couple of strikes out of this world.

"But we showed what we could do in the second half, that we are not a bad team and that we can compete."

Brighton assistant boss Nathan Jones: "The final score probably flattered us a little bit because Doncaster put us under a lot of pressure in the second half.

"We've had horrendous luck with injuries and it's just a matter of getting through that and picking up points along the way.

"I thought we showed a lot of resilience under pressure and determination to win the game."