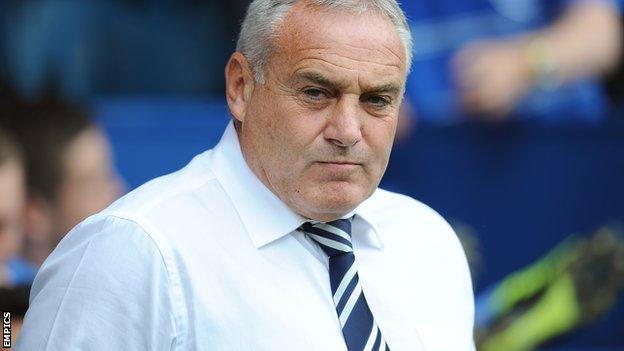 Fryatt opened the scoring after a pass from Michail Antonio, who made it 2-0 with a low curling shot from 20 yards.

Pavel Pogrebnyak pulled a goal back with a header, but a Sean Morrison own goal restored the hosts' two-goal lead.

Owls debutant Connor Wickham blasted in a fourth and then set up Fryatt to grab his second goal, before Reading's Adam Le Fondre converted a late penalty.

The victory takes Wednesday, who had started the day bottom of the Championship, up to 21st and out of the relegation zone, while Reading remain fifth after their third league defeat of the season.

Dave Jones's Wednesday side had been the only team in the Football League or Premier League not to have won a match, but that record looked like ending after 25 minutes when they moved two goals ahead.

A long ball by Kamil Zayatte was misjudged by Reading left-back Stephen Kelly and that allowed Antonio to pull the ball back to Fryatt for a simple finish for the opener.

The Owls doubled their advantage six minutes later as Antonio received the ball from Seyi Olofinjana on the right wing, cut inside and placed his shot past Reading goalkeeper Alex McCarthy.

Russian striker Pogrebnyak headed in Chris Gunter's cross to make it 2-1, but the hosts held a 3-1 half-time lead after Wickham's shot rebounded off McCarthy and hit Morrison with the ball going into his own net.

Wickham, who joined the Owls on loan from Sunderland on Friday, netted his first goal for his new club with a powerful finish after fine play on the wing from Antonio.

Fryatt then got the hosts' fifth after 62 minutes, lifting the ball over McCarthy after linking up with Wickham.

In injury time, Le Fondre scored a consolation spot-kick for his sixth goal of the season after Reda Johnson fouled Pogrebnyak in the penalty area.

"I feel it's the reward for the players for the hard work that they've been doing. We just needed to turn the draws into wins and everything that could go for us went for us and these are the days you've got to enjoy.

"It's been coming. All that frustration and bad luck came good. I can't fault the players and they should enjoy it, because on Monday we'll batter them for the mistakes they did make."

"I thought we started well and played some good football, but goals changed the complexion of the game. We were good for the first 20 minutes and then Wednesday scored a goal against the run of play.

"The goals are shocking from our point of view and they changed the game. We did well in periods but in the end we just got thumped 5-2 away from home."