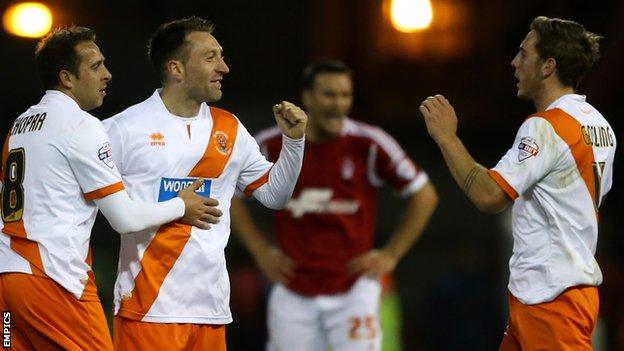 Forest winger Djamel Abdoun was sent off after 34 minutes when he fouled Neal Bishop in the penalty area.

Dobbie won it in the 91st-minute, firing low into the net from 12 yards.

Blackpool's injury-time winner was the seventh time they have scored in the last 10 minutes of Championship matches this season.

The victory keeps Blackpool, unbeaten in seven matches, in fourth position in the table, with Paul Ince's side now six points behind leaders Burnley.

For Forest it was their second successive defeat, following a surprise 3-1 loss at struggling Yeovil Town last Saturday, and Billy Davies's team have now won only two of eight league matches, although they remain in the play-offs in sixth place.

Algerian Abdoun had come close to opening the scoring but dragged one effort wide from a tight angle and shot at Gilks, before the winger was dismissed.

Ince, aiming for his third goal in as many matches, had his penalty saved and Darlow also kept out a Dobbie free-kick as Blackpool applied pressure.

Darlow again denied Ince in the second half, but the home goalkeeper was finally beaten as Dobbie finished after good work from substitute Nathan Tyson to snatch a dramatic winning goal.

"I spoke to the referee and the officials, because there were three very big incidents in the game - Henderson's claim for a penalty, the red card and then the Blackpool goal. The officials have agreed that there was contact on Henderson, when he was trying to get a shot on goal.

"I thought it was a penalty. I don't think Henderson was trying to win a penalty, when the ball was coming on to his left foot. There is no doubt that it was a red card for Abdoun. He was a little naive, he should have cleared the ball or given it to the keeper. We are not asking for much. We are just asking for them to do what they have to do."

"We were one of the favourites to go down at the start of the season, so our league position is a credit to the players. We were looking at survival, to begin with, the goal is still to get 51 points then to look at things from there, when we get to that point.

"We had 40 trial players in over the summer, but we got a good group of players in. There are a lot of leaders and winners in there. We did not expect to be in this position. But we know we have a special group of players. We try to make it hard for teams to break us down."