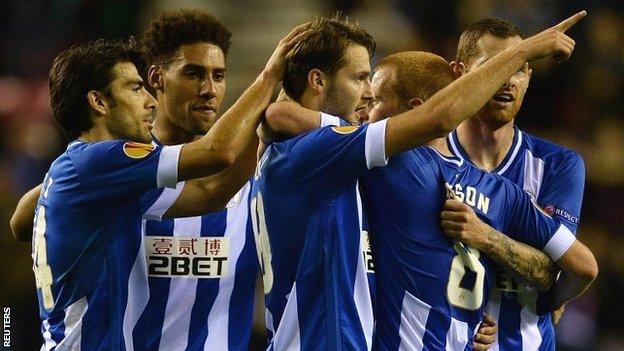 Goals from Leon Barnett and Nick Powell gave Wigan a first win in five matches as they edged out Huddersfield.

The Latics took the lead when Ben Watson's corner was headed home powerfully from close range by Barnett.

Town equalised on the stroke of half-time when Oliver Norwood's shot deflected in off Ryan Shotton.

But Wigan were rewarded for their positive approach after the break when Powell took Jordi Gomez's pass and rifled past Alex Smithies.

The remainder of the game was not pretty, but the home side held on to send them into Thursday's Europa League trip to Rubin Kazan in good spirits as they extended their unbeaten home run to seven games.

In good Nick at home

Powell's goal was his fifth in all competitions since joining Wigan on loan from Manchester United. They have all come at the DW Stadium

Wigan could have been out of sight by the halfway point.

Powell's pull-back was fired over by Marc-Antoine Fortune with only two minutes gone, while Callum McManaman was making good progress every time he got the ball out on the left wing.

Powell, 19, squandered another decent opening before Chris McCann saw a stinging effort from distance tipped over by Smithies.

From the resulting corner, though, Watson's delivery was headed home emphatically by Barnett for his third goal of the season.

Keith Southern nearly equalised for Town within moments, only for his deflected shot to fly past the far post, and they levelled on the stroke of half-time when Norwood's shot beat Lee Nicholls via Shotton.

Powell restored Wigan's advantage within five minutes of the restart.

After Fortune had fired against a post, Powell was found by a good ball from Gomez and lashed a cracking strike that was past Smithies before he could move.

Huddersfield came close to a second leveller when Danny Ward's effort was saved by Nicholls at the second attempt with Town attackers lurking.

Ward's cross then threatened danger before Barnett headed away in the nick of time.

"I thought the first half was very much a controlled performance. With a bit of luck we could have had two or three goals, such was our quality. Their goal wasn't even going in before it hit the heel of Ryan Shotton and deceived Lee Nicholls, who looked good value for another clean sheet.

"What we had to do in the second half was win the game again and we did that thanks to a great goal from Nick Powell. The lead we had was fragile but I thought we should have had a couple of penalties in the game.

"We've certainly not had our fair share of decisions this season and we had to stand up and be counted late on. Even then we could have added to our lead and, given the workload we've had, I was delighted with the three points."

"I thought we did well. To come to Wigan and have the lion's share of possession is very good, but obviously the over-riding emotion is one of disappointment because we have gifted them two goals. They have not had to work at all for their goals,

"We're playing against a good team who have just come down from the Premier League, the FA Cup holders, a team in the Europa League and we've given a decent account of ourselves.

"We are a work in progress but we can defend better and make better decisions at times. Overall I'm pleased but also disappointed that we've not taken at least a point - and maybe even three."