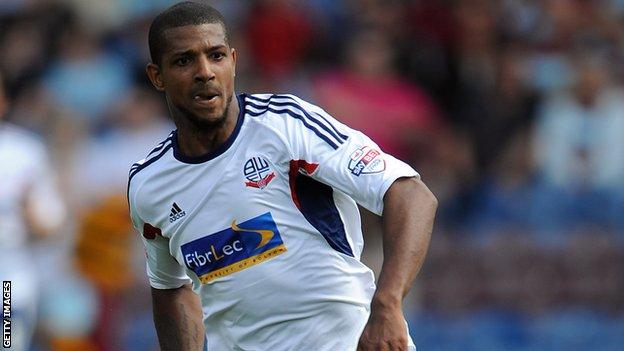 Jermaine Beckford's stoppage-time goal against Bournemouth helped Bolton to their second league win of the season.

David Ngog put the visitors in front at Dean Court when he rounded goalkeeper Lee Camp before half-time.

Charlie Daniels fired over for the Cherries after the break as they failed to score in the Championship for the first time this season.

This was the the first clash between Bournemouth and Bolton at second-tier level, and the first time they find themselves in the same division in 21 seasons.

Bolton's form continues to steadily improve after a disastrous start left the Trotters without a league win until early October when they beat Birmingham away.

They got off to a good start against Eddie Howe's side when Alex Baptiste had a powerful effort in the 11th-minute tipped over the bar by Camp, who joined Bournemouth on loan from West Brom in the week.

The opener came eight minutes before the break when Ngog raced on to Chung-Yong Lee's through ball.

Daniels then had his effort in the second half and substitute Brett Pitman curled over a free-kick for the hosts.

But Beckford sealed the victory for Bolton to move them up to 19th in the Championship.

"When you do not win regularly we are disappointed but from my perspective I have never lost sight of where we are heading.

"This year was always going to be a difficult transition for us. We went from the wrong end of League One to the middle of the Championship but I think we deserved something from the match."

"With the group of players I have got and the backing of the club we can achieve whatever we want to achieve. Today we showed how much quality and determination we have got and that can spring us up the table.

"I think 2-0 flattered Bournemouth in the end. We worked hard for each other and my two strikers got the goals they deserved."